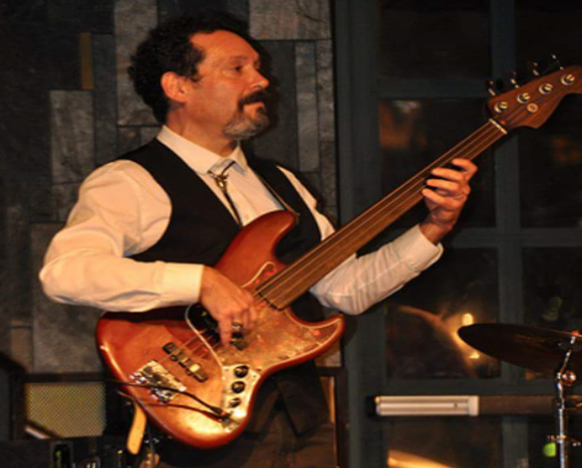 I grew up in a house with a lot of live music.  My dad and his brother (my original guitar heroes) played and wrote folk music, and there were always guitars to play in the house.  I started learning how to play at about 8 yrs old, and joined the school band at North Main Street School in Spring Valley, New York when I was 11.  Bill Withers’ sister was the special ed teacher there and arranged to have Bill’s full band play in the little gym/ auditorium.  That was my first live concert and a real music lesson about what a rhythm section can do.  After the show, as the band was packing up, Melvin Dunlap came over to where I was standing with my elbows on the stage, and said he saw me checking him out, and asked if I liked the bass (I’m sure I was staring at him!).  I told him I did, and that I was learning guitar.  Melvin grinned and said “this is the bass; bass is where it’s at!”

When I was 13, my best friend Andy Rossi (now senior vice pres. at Korg) who also played guitar, suggested we start a band, but insisted that I play bass.  I immediately thought of Melvin Dunlap and said yes!  No looking back!

That was my dad’s condition on my buying a bass.   When I was 14, I found a teacher through the original Alto Music in Spring Valley.  I can’t remember the guy’s name, but he had an old full-size upright and an Alembic electric bass that lit up!  He was very relaxed and promised that he wouldn’t make me read out of the Simandl studies if I practiced my exercises, and learned my theory!  I stayed with him until I was 16 or so, and then started commuting into Manhattan on weekends to study with different bass teachers-anyone I could find really.  When I was 17 I got a job teaching bass at Alto Music, and had the realization that you can also learn from your students!

In 1981 spent my first semester of College at Berklee in Boston.  Berklee was a great experience, but I heard that Ron Carter was going to start teaching at the City College of New York in Harlem; a very short train ride from my apartment.  So I came home, auditioned with Ed Summerlin at City College (played a Jaco-inspired version of Charlie Parker’s “Donna Lee”), and was accepted into the program.  I showed up early for the commencement faculty performance and sat in the audience right next to where Professor Carter’s bass was lying on the ground.  He showed up almost 45 minutes late due to a snag at a prior recording session, not in the best mood.  He uncased, picked up and tuned his bass, and then launched into the first notes with the faculty jazz orchestra with such volume and power that I literally almost fell off my chair.  First lesson.  I learned so much from him- a real master, and a very nice man.  He made me defend every note choice I made.  Ron and I split up after my first year over my preference for electric bass.  I then studied with Blood Sweat and Tears bassist Ron McClure-a great bassist and guy, again through the City College, and then privately with Homer Mensch, from the “Jaws” soundtrack/ NBC Orchestra/ New York Philharmonic.

Bass players who influenced you:

In 1982 I got a job teaching and playing bass at Talent Unlimited, a NYC high school program for the performing arts, where my brother attended.  TU was a NYC entity with connections to a lot of cultural organizations, so we got to play for the gospel choir at the Abyssinian Baptist Church in Harlem, and regularly performed at civic events for the City and Board of Ed.  The program had an astounding array of young performers, including Cory Glover of Living Colour.  Keith Jarrett and Joanne Brackeen sent their kids there.

I also joined the act “Mike Quashie, King the Limbo,” a glam rock-Calypso band.  Mike Quashie was famous for his friendships with Jimi Hendrix, Lou Reed and Led Zeppelin, and was a fixture in New York’s West Village.  We played a lot of dance clubs.  Quashie really focused on theatrics as well as the music, and I learned a lot about presenting on stage from him.  You can see him doing his fire act, setting John Bonham’s gong ablaze on the opening reel of the Led Zeppelin DVD.

My brother (a drummer) and I also hired ourselves out in the mid-80s as a rhythm section, and worked as a band in Manhattan with some of the talent from Talent Unlimited.  We called ourselves “The Worx” and did studio work, supported other acts, and performed our own original music in local venues.  In 1985, we cut a demo “Invisible Man” for Sony, but turned down the deal offered.  My brother continued to court Sony, and wrote for them, ultimately focusing on songwriting, engineering and production.  Dee Lite’s “Groove is in the Heart” is a good example of his early skills behind the console.  He’s still making it happen, big time.

I also played bass for several independent New York bands during the mid 80s including Rich Blood and the Equators, Black Tire Safari, and The Troubleshooters with Alan Freedman, and in 1985 I joined Bill Sledge and his Hammers, playing jazz six nights a week during the summers at Tavern on the Green.

During winter of 1986 I escaped the cold by joining Princess Cruises’ Love Boat Orchestra; an 11-piece band playing production shows, and backing guest performers in the ship’s main theater.  This was a stellar band, full of seasoned pros from Vegas and younger pedigreed jazzers.  The only guys in the band who didn’t have degrees were myself and saxophonist Victor Goines (Wynton Marsalis’ cousin and director of jazz studies at Julliard and Northwestern University).  That was the most musically challenging, yet cushiest gig imaginable.  I can’t understate the luxury of not having to set up and breakdown gear for each show!   Of course the food, the itinerary and the social life were extraordinary.  Then I met my future wife from Chicago on board the ship, and by 1990 I was back to living life on land.

When I got to Chicago I started jobbing on events with the Michael James Orchestra; a local big band, and working in the studio and on live dates for local indie bands, including Jack Salamander and later Barrett’s Hidden agenda, but my focus was primarily family and raising kids.

Nowadays, with the kids out and having their own adventures, I feel lucky to be playing more.  Currently, I’m recording both locally and back on the East coast, and I’m very happy to be playing live again with the popular festival band The Sofa Kings, Barrett, Jack Salamander, the Vini Bruckert Band, Black Partridge, and country band Hodie Snitch.  And I’m looking to do a whole lot more!  Have guns, will travel!

Your go-to basses back in the day, and now, and rigs:

1974 My first bass; a one pickup Guild Jetstar mated to a Gibson EB neck, so that it looked like a Gibson EB0 (it took a few years before I figured that out).  Rig:  My dad’s black Kustom plush.  I loved that amp.

1978; a Rickenbacker 4001 modified with a brass ingot milled to fit the slot under the bridge, the brass was welded to a Badass bridge (all work imagined and done at Alto Music); sounded great for a couple of years but too much tension eventually made the neck warp.  Rig:  Ampeg SVT.  I took that to a couple of gigs on the NYC subway (with help).

1983 I traded Ron Carter a broken down old 7/8 size Czech upright I had, for a fretless Fender Jazz with a neck of unknown manufacture (solid piece of rosewood with a single strip of maple down the back for the truss rod, no fingerboard, metal inlaid markers on the side only, old style grover tuners, but with a crack behind the nut before the first tuner).  I took the bass to Roger Sadowsky for an assessment before agreeing to the trade. He took the neck off and told me that Dave Schecter signed it, that the crack repair would be stronger than new, and that if I didn’t want it, he would buy it.  Good enough for me; by the end of the week it had a new set of EMG J pickups, a set of Roger’s hand-wound pots and wiring, and a headstock that still looks like it was never cracked.  Always my go-to if frets aren’t required.

1987 The moisture at sea was taking its toll on the fretless, so I made an emergency run to the big guitar chain in LA as soon as we made port, and played every bass in the store.  The best playing instrument at any price was an Ibanez RD707.  It was cheap, light and sounded great; perfect for the gig, and it still feels and sounds great.  Rig: Dad’s black Kustom plush!

Today, I still play the fretless and the Ibanez.  I picked up a new Gibson Thunderbird a few years ago and am just loving it.  The redesign makes it hang so much better than the old version, and the look and sound are just iconic.  Rig:  TC Electronic RH450 and Eden Nemesis.

A description of your playing style.

I like to think, musical and natural.  Everything else is so artist/ song-dependent for me.  I take my note choices seriously and focus on the feel.  I try to give every song what it needs from the bass, adding a little fun and flavor, just when and where it can really use it.  That’s it; Fun!

A few songs to highlight your playing: 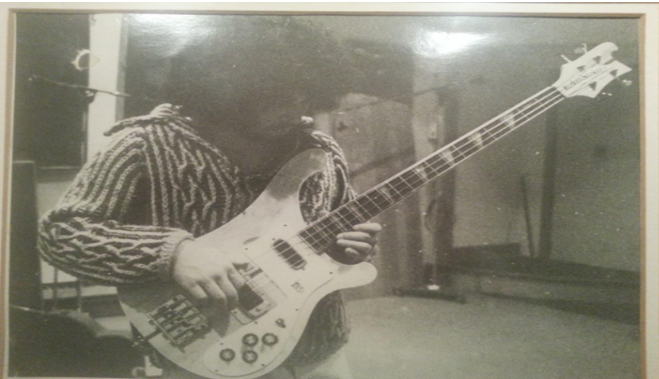