Tom’s Top Ten Reasons Why You Should “Own” One Bass… 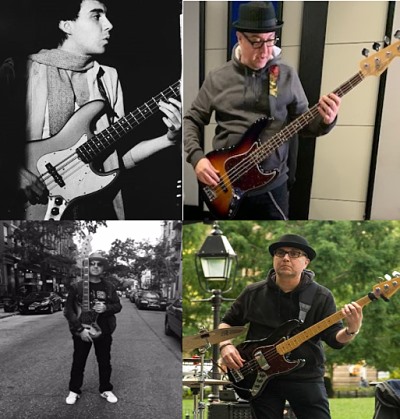 One: The bass is your spouse. If you are fortunate in life to find the ideal soul mate, why cheat? Why look elsewhere? Older players understand where I’m coming from…youthful indiscretion is an important part of…. youth! And growth. (Note that the author has been married twice!)

Two: You become a better player by negotiating the strengths and weaknesses of a single instrument. If you jump to another instrument because playing a certain style is easier on said instrument– you compromise your potential to improve and the opportunity to truly forge your own voice. M’shell Ndegeocello slaps with heavy flats. Bobby Vega funks with a pick. Fernando Saunders and Tony Franklin did not concede their fretless inclinations for their respective bandleaders Lou Reed and Jimmy Page – two artists who couldn’t be more diverse.  Be like these cats!

Three: Identity. Your sound is you! Your phrasing is you! Your note choices are you! Unless you toil in a repertory or tribute ensemble, all musicians (should) strive to be recognizable in a single passage. To a significant degree, when you move from instrument to instrument to instrument you do so at the expense of tone and playability which have a direct impact on your identity. I concur with the tenet that tone is (mostly) in your fingers and soul– however the instrument buffers the two. Don’t mess with that synergy! Playing basses with different neck widths, shapes, weight distribution, fanned or trad frets, extended range, and scale lengths – among other characteristics – alters the way you play. The more instruments you play, the more your true identity is distorted. That is, if you want to have a “true” identity. I’ve met many a player content to appropriate their respective heroes. And it’s big business too – behold the massive popularity of “signature artist” instruments.

Four: Visuals. When you compose, practice, and record – you are an artist. When you step on the stage, you are an entertainer. Macca: Hofner. Jaco: Fender fretless Jazz. Marcus Miller: Fender Jazz by way of Sadowsky’s revisions. Chris Squire: Rickenbacker 4001. Stanley’s Alembic … For those obsessed with aesthetics – swapping out pickguards affords you a fresh veneer when you get fidgety. You get the picture….

Five: And bandleaders, producers, engineers, sound-techs, and bandmates get a picture too. Among the most crucial roles of the bassist is one of infallible reliability. Be that cat who is dependable with the gear that is best for you and the situation gig after gig after gig. Fact is most basses are indistinguishable in the final mix – which is where they belong. Who knew Macca was playing a Fender Jazz on The Beatles, Abbey Road tracks until the archival releases revealed photos of the actual sessions? Can you pick out the P bass or the J bass with David Hood, Willie Weeks, Dee Murray, and John Paul Jones – all of whom used both models? Exaggerating an element of a tone of a bass: refer to Jaco Pastorius, Chris Squire, Aston Barrett, Jack Bruce, and Robbie Shakespeare – is rare – though commendable in the hands of a master.  You can hear nuances in the headphones or perhaps during a solo, but those subtleties vanish among the din of other instruments. Don’t sweat it.

Six: Whoa, I want more timbre options! Good for you. Invest in strings! Instead of piling up instruments – have at your disposal multiple string species (flat-wound, round-wound, tape-wound, half-round…) in multiple gauges (light – medium – heavy). Game over! Now you have a myriad of pitches that will accommodate the majority of circumstances wherein your services are required. Cut the strings to size in advance and you can change ’em in under three minutes.

Play with your fingers, play with a plectrum, learn to palm mute, employ a “waddafoam” in proximity to the bridge. All these techniques affect your tone, note choices, and approach to the instrument. Variety is the spice of… growth, evolution!

Seven: Attitude! Miles Davis “Anybody can play. The note is only 20%. The attitude of the mother****er who plays it is 80 %.” How cool is it to observe keyboard players, drummers, guitar players, and the motley hassle with assembling interconnecting gear, pedals, elaborated rigs etc. as I simply and swiftly plug and play my Fender Jazz bass? I can soundcheck from the bar – and often do. Cool tries to be me! The bass is a relatively “simple” instrument – don’t make it more complicated than it needs to be.

Eight: Multiple instrument ownership breeds indecisiveness. With one instrument, you never have to choose. Did Hank Aaron choose what size bat he was going to hit with every time he stepped to the plate?

Nine: Old chickens make the best soup de jour. Maybe it’s my vintage ears, but the more I play the same instrument the better it sounds. And with battle scars, dings, dents… older looks even better.

Ten: Space! Unless you reside in a house or have access to storage, basses in cases take up too much spaces!

WARNING: Tom’s Top Ten Reasons… are my opinions profoundly informed by a career that is probably a lot different than most bass players who are reading this. I chose to take the “artistic” career path rather than the “working musician” road. As such, my focus has always been to create new music by way of original compositions or reimagining / reinterpreting the work of others. In no way do I feel this approach is superior nor inferior to those who engage on a different journey than mine. I afford hosannas aplenty to my colleagues who have balanced both art and commerce as a player.

Obviously, if you are a working pro, you’ll need fretted / fretless / extended range instruments and the doghouse and/or a portable variation thereof. As referenced, if you play in cover / tribute bands or work for a bandleader that insists on a certain style and resonance – you’ll need to play that instrument. Versatility and flexibility be thy names lest unemployment be thy status!

Note my use of the word “own.”  I’m referring to your “go-to” instrument. The one that is “you!” And that “go-to” bass can change as you evolve as a player… It has for me!

How I Got Here If You’re Interested: My first teenage band set the template for my career. Deeply inspired by the music of my generation: Patti Smith, Bowie, Eno, Talking Heads (among others), me and my simpatico mates dedicated ourselves to writing, and recording our own songs rather than duplicating our heroes. We were not among the popular bands in the neighborhood who played the hits of the day – but all the artsy girls would do anything for us! Hey, wasn’t that the point of being in a band in the first place?

Aside from my tenure in Top-40 bands as a University of Miami (music minor) student circa 1979-81: I never worked in cover bands. I’ve never played a wedding, Bar Mitzvah, graduation / retirement / landmark birthday party, socialite event, corporate event, or permutations thereof. I don’t even like attending such occasions as a guest! I’ve never worked as a sideman for a major artist – hence I never had to learn the previous bass player’s work. When I played Off-Off Broadway productions I worked mostly off-off lead-sheets so the basslines were all mine. Kudos to the players who work such “tuxedo” occasions, anchor established acts, and “proper” orchestras / pit ensembles wherein your job is to play as you are instructed by your musical director. The challenges you face on and off the bandstand require much humility, dedication, and utmost professionalism. As such you need an array of instruments: right tool for the right job. And to the collectors – buy as many basses as you so desire. Life is short, so many basses so little time.

I salute ye players of all generations, genres, and predilections!

I could be right I could be wrong I could be…Every one of these ten reasons can be argued, debated, disapproved, or validated. Be my guest!