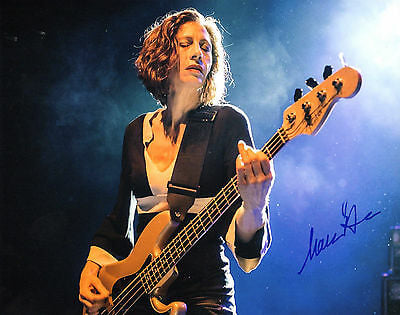 Bass player Maureen Herman (7/25/66) has musical roots you would never have imagined. Growing up in Libertyville, she worked on the high school paper Drops of Ink with none other than Tom Morello of Rage Against the Machine and Adam Jones of Tool. She would go on in the ‘90s and become a key figure in the all-girl punk band Babes in Toyland.

Herman was introduced to punk and new wave through a high school friend whose brother was an album cover artist for Warner Bros. and Beserkley record labels. Through the connection she attended her first concert when she was just 12 seeing the Stranglers and meeting their lead singer Hugh Cornwell. From that point, she was hooked.

Graduating from Libertyville High School, Herman moved to Minnesota, attending the University of Minnesota with a major in Film Studies and minor in Journalism. She returned to Illinois briefly to help high school alumni produce a video, The Season of the Snow Bitch, a horror spoof. At the time Morello and Jones had a band Electric Sheep and provided the musical soundtrack for the video project.

Her brother had a garage band. “He taught me ‘Smoke on the Water’ one day,” she remembers. Then in 1988, when her brother injured his hand in a restaurant kitchen accident she inherited his bass guitar and began playing in her first band M&M Stigmata.

Meanwhile Babes in Toyland was first formed in 1987 by vocalist/guitarist Kat Bjelland in Minneapolis. She first met drummer Lori Barbero at a friend’s barbecue, bringing on bassist Kris Holetz and vocalist Cindy Russell to complete the initial lineup. Some changes in the early going saw Holetz and Russell leave, bringing on bassist Michelle Leon with Bjelland handling lead vocals. They released their first record in 1989 with the single “Dust Cake Boy” (Sub Pop) which led to their debut album Spanking Machine (Twin/Tone) in 1990.

Deciding to move back to Chicago Herman was quickly embraced by the burgeoning indie scene. As a matter of fact, veteran producer Steve Albini let her park her U-Haul in front of his place and the people at Touch and Go Records let her store her stuff in their warehouse. Soon, she was living in a space with the band Jesus Lizard dating their guitar player and was playing bass at the time with Cherry Rodriguez.

With Babes in Toyland getting ready to head into the studio for their second album, Leon left the band shortly after the death of her boyfriend Joe Cole who was killed in an armed robbery.

Herman recalls, “An old friend phoned with news that the bassist had quit the band and asked if I’d like to join. That band, Babes in Toyland, had just signed to Reprise and was about to record their major label debut. I joined,” she said in an interview with Harmony Central. She almost missed the opportunity when she headed back to Minneapolis to work out with the group but missed the first session when she was arrested and jailed for delinquent unpaid parking tickets. Once that was resolved, “In two weeks I was on tour, with a recording session scheduled immediately after we got off the road.”

That initial tour, by the way, was an international tour opening for Nirvana. For the next four years, Babes in Toyland would tour extensively in the alternative rock music circuit including major festivals such as Lollapalooza and the Reading Festival in the UK. The group would record three albums and an EP for Reprise.

You would think they were on the road to success. But for Herman, it was just the opposite. She left the band in 1996 due to what was indicated as “health problems.” In Herman’s words, “I couldn’t remember the last time I had enjoyed music either as a player or a listener. It had been far too long. Warner Bros. (Reprise) and the rest of their dysfunctional family had chewed up all the good parts, leaving only the greedy, ugly parts exposed.”

The band plugged along for a little while with different bass players filling in, going on hiatus, and then announcing in 2001 that they had disbanded.

Herman returned to her journalist roots and went on to work as associate editor for Musician magazine and freelance journalist for Rolling Stone. In 1998, she started her own company, Pollyanna, which was involved in the music business in various forms, including management, booking, promotion, publicity, and music publishing. In 2006 she joined the music, technology and e-commerce platform Fuzz as Senior Director of Business Development and Editor-in-Chief of their social networking editorial e-zine The Fix. Taking an active role in social justice causes she founded the non-profit Project Noise Foundation.

When Babes in Toyland re-united in 2014 and started playing live again Herman returned to the lineup. But when an international tour was planned for 2015, Herman was fired and replaced by Clara Salyer. Apparently, her journalistic credo got in the way of the band’s potential plans as she had written a piece on the Boing Boing website citing sexual assault allegations against Kim Fowley. As Babes in Toyland had industry connections tied to Fowley, there was concern of harming future business for the band.

Looking back on her years with Babes in Toyland, when asked whether it was hard to be in an all-girl punk band in a male dominated industry? She didn’t really think so. To her the hardest part was dealing with the press. In her eyes, “We were another band, not an all-girl band.” But they kept getting pigeonholed with the likes of L7 and Hole who had different styles of music. “We were in indie rock vein.”

For Herman, it was time for her to retire her bass guitar. Babes in Toyland would continue on, only to break up again in 2020.

Herman has returned once more to her journalistic roots, moved back to Illinois into a house that was once high school alum and friend Tom Morello’s grandparents’ home. She’s domesticated, raising her daughter and continues writing. She’s in the process of finishing up her memoirs, which will be released mid-year 2022 titled It’s a Memoir, Motherfucker (Flatiron Press) which she says as she’s reflected on a life that involved addiction, alcoholism and PTSD, “is my way of trying to bridge that gap between who I am and who people think I should be.”

You can follow Herman on her Facebook page https://www.facebook.com/maureenherman and she invites you to get deeper into her writing on https://www.patreon.com/maureenherman, a subscription-based outlet where she says she takes her personal writing to a more intimate level.

Babes in Toyland (with Herman)

The Babes in Toyland track “The Girl Can’t Help It” was included on the 1994 various artist compilation Fast Track to Nowhere: Songs from the Showtime Original Series “Rebel Highway” (A&M 540240).

The relationship with A&M continued that year with the girls contributing “Calling Occupants of Interplanetary Craft” on the various artist compilation If I Were a Carpenter (A&M 540258).