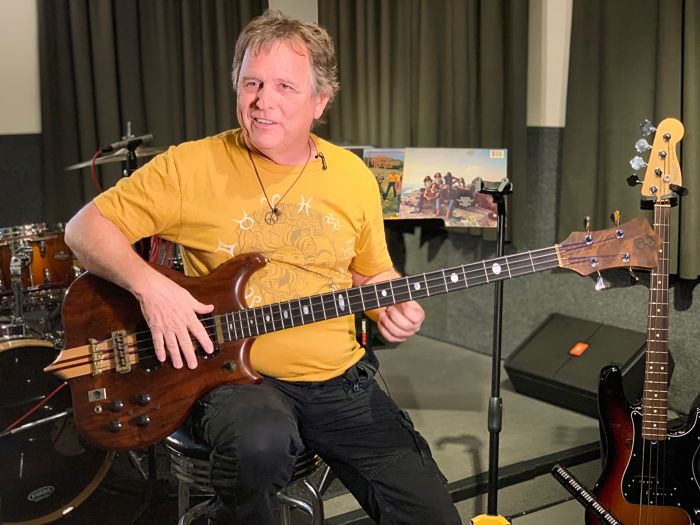 Appreciation: recognition and enjoyment of the good qualities of someone or something; gratitude; a piece of writing in which the qualities of a person or the person’s work are discussed and assessed; a full understanding of a situation.

The Hall, in all its infamy, cited the founding members despite the extraordinary contributions of those that followed. Including a virtuoso bassist from a place called Oxford, Ohio.

I can’t quite remember the exact details or time frame wherein I received a “thank you” missive from David “Rook” Goldflies. When I discovered that his extraordinary repertory A Brothers Revival ensemble had a show in Long Island, which I unfortunately could not attend (I had a gig as well!) I asked if he’d sit for an on-camera interview at Euphoria Studios in Manhattan the next day, to which he agreed.

I invited photographer Wade Gradia, who’d shot photos of David’s predecessor, the late great Lamar Williams, and had attended many Allmans, Sea Level, and Dickey Betts Great Southern concerts back in the 1970s.

Also among my crew was renown bassist and collector Tony Senatore, who came up with a brilliant visual: a vintage Alembic bass similar to the one David used with the Allmans and Betts. Surely Goldflies had not touched one of these four string beasts in a long, long time! (He hadn’t – and was thrilled to discover that Senny had paid rapt attention to detail!)

When the legacy of the Allman Brothers Band is reviewed, the emphasis is obviously on the original watershed version featuring Duane, and Berry Oakley. 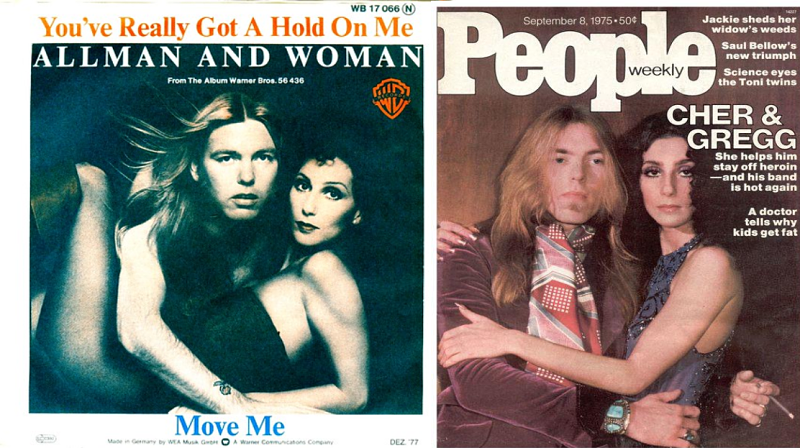 The latter-day line-ups with bassists Allen Woody and Oteil Burbridge are probably the most recognizable to the masses due to the emergence of digital media / video sharing platforms and extended star-studded engagements at New York City’s hallowed Beacon Theater.

So, what about my David “Rook” Goldflies version of the Brothers?

The year was 1979 and American roots music was not represented in the mainstream – which is where most teenagers, myself included, got their information during the Carter Administration. 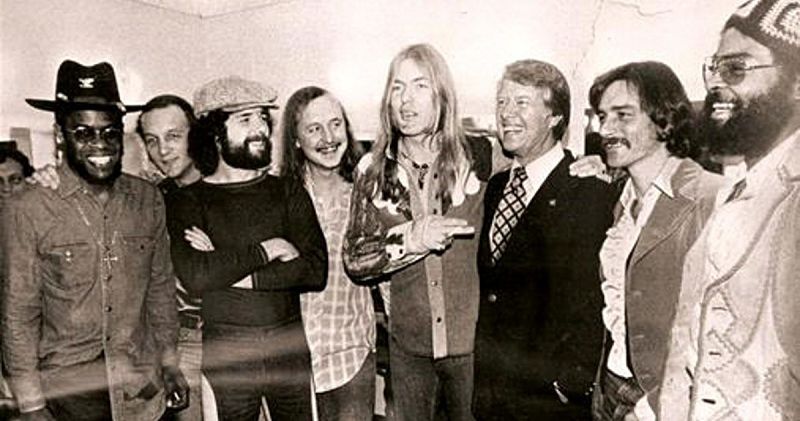 Also note that this was ancient times previous to social media, websites, and the indie-specialty publishing explosion of the 1990s wherein every genre of popular music was represented in numerous magazine formats. Sure, there was Rolling Stone, Spin, Creem, New Musical Express, and Circus in the rock forum – however their spotlight, to my tastes, all to often shone on artists with a lot more sizzle than substance.

The Allman Brothers never lacked substance. Their sizzle was their musicianship. Go figure!

With Rook they waxed a trio of records which acquiesced to the commercial tastes of the day. Again we must remember, this was before the emergence of the “legacy artist” in rock music. Either an artist resonated with what was considered “contemporary” lest they be relegated to the group-think journo tastemakers and radio programmers as “irrelevant.”

Nowadays veterans spanning Tony Bennett to the Rolling Stones are cited for the classic artistry that initially brought them the recognition they richly deserved in the first place. The final incarnations of the Brothers were able to bask in that legacy glow, but that was not the case with the Rook Brothers Band.

Ignored and somewhat disdained by the establishment, David’s version of the Allman Brothers Band kept the flame burning for a generation too young to experience the Fillmore East/West era on the concert stage. Their fiery performances and musical references prompted young players such as myself to dig out vintage blues and jazz records to uncover where these cats were coming from. And Rook was just a kid barely in his 20s! How did he play with such depth and maturity?

I was witness to the Brothers with Rook during my days at the University of Miami, and the bass players, guitarists, and drummers were all taking notes!

And as for those overlooked Allmans ’79 – early ‘80s slabs, if they were cut by a younger, prettier ensemble with million-dollar video budgets and designer clothing endorsements, they’d be considered career highlights rather than Allmans lowlights. Perhaps I should abscond the masters, hire a few TikTok models, and re-release the music!

Goldflies’ career since the Allmans is the most diverse, adventurous, and exploratory of all the members who served in one of rock’s most influential ensembles. I advise you to follow him on social media and his website. https://www.goldfliesmusic.com/

Sans the Rook version of the Brothers, would the band have ever reunited in the late ‘80s until their retirement in the 21st Century wherein they recaptured some of the old glory and added a few new chapters? Maybe, maybe not.

Regardless, Rook’s role was undeniably vital. But that’s the life of the bass player, ain’t it? The other guys get all the credit!

To paraphrase Ron Carter “You may be the bandleader, but the bass player leads the band…” On behalf of my generation of bass players (“The Rook Renegade”), thank you David Goldflies for the inspiration (at the right time) and the timeless music. Long may you pluck, plectrum, bow, mute…

(Note that Tony Senatore anchors a power – progressive rock ensemble dubbed “Rook.” However the official inspiration for the name is drawn from the chess game piece. Though I do detect a Goldflies aesthetic to Senny’s playing. Where’d he learn that?)

Read David’s take on the Allmans….

Own a Little Piece of the Allman Brothers Band? You Probably Already Do.

The Allman Brothers band has achieved legendary status in American rock music culture. While younger generations have mostly moved on, the iconic status of much of their music, especially from their early years, keeps their music very much alive. Selections like Dreams, Midnight Rider, and others are part of the soundscape of current movies and TV shows.

I was fortunate to play in the Brothers from 1979 to 1983. After that experience and in the 38 years since I noticed an interesting phenomenon. It goes something like this.

I’d meet someone, and they would at some point ask me what I do. I’d say, “I’m a musician,” to which they would say, “Oh great, where do you play”? Eventually, it would come out I was a bassist for the Allman Brothers Band. At that point, if they had had any experience of their own with the Allman Brothers, such as going to a concert, buying an album, or a favorite song, they would tell me about it.

But I then realized that at that moment, they had inadvertently had another experience with the Allman Brothers Band — Me! I wondered, where does this chain of association stop?

I’ll stop here. You get the idea. My question once I observed this was, where does the chain end? Or does it?

Flash forward to now. In the spring of 2021, my band, A Brother’s Revival, where we strive to bring the original recordings of the Allman Brothers Band to life, resumed touring. The audiences at these gigs were enthusiastic to hear live music again after over a year of various lockdowns due to COVID-19.

After each show, while hawking our band merch in the theater lobby, many fans would come up to us, and almost every one of them, after expressing how much they loved the show, would then slip into a more serious, almost reverential demeanor and would tell me about their previous experience with the Allman Brothers. One man told me that he had seen over 50 shows by the band. Another woman told me the story of serving the band dinner one night in Ohio and how Gregg Allman had spoken to her during the evening. Another knew someone that had dated a roadie of the band 40 years ago.

Each story was different in detail, but there was a common thread. Each person owned their story and, in some cool, magical way, felt a strong sense of connection to the community that has surrounded the Allman Brothers for decades. In most cases, these memories went far past identifying with the actual music the band played.

The keyword in all of this is “owned.” The sense of ownership in these stories was palpable. And a bit humbling since we were here to bring this music to life. The fact that these stories came out so easily after our show helped me believe that we are doing a respectable job representing the Allman Brothers’ music.

So I got to thinking about the piece of the Allman Brothers that I own. Although I didn’t know it at the time, and to be honest, I’m sure the Allman Brothers didn’t know it either, by being asked to play with guitarist Dickey Betts (and eventually with Greg Allman, Butch Trucks, and Jai Johnny Johnson), I was being entrusted to learn and in some way carry on the music of the Brothers. That idea took almost 35 years for me to understand, let alone put into motion.

What part of the Allman Brothers legacy do musicians like myself, that have developed their talent and style from the Allman Brothers’ music, own? When arranging, rehearsing, and touring A Brother’s Revival, I find my relationship to the music, culture, and yes, the community that defines the ABB’s legacy keeps expanding as we dive deeper into the music of the band. Each story told to me after our gigs, in fact, wherever I hear them (at the grocery store, in the doctor’s office, on an airport shuttle), makes me think of the endless chain of association that exists around the group.

I’m glad I can be a self-aware flea on the back of the dog that was treated by the vet of the person whose friend dates someone who met a dude from the Allman Brothers.

Although I didn’t realize it at the time, it has been the most unexpected gift I’ve experienced in my life. 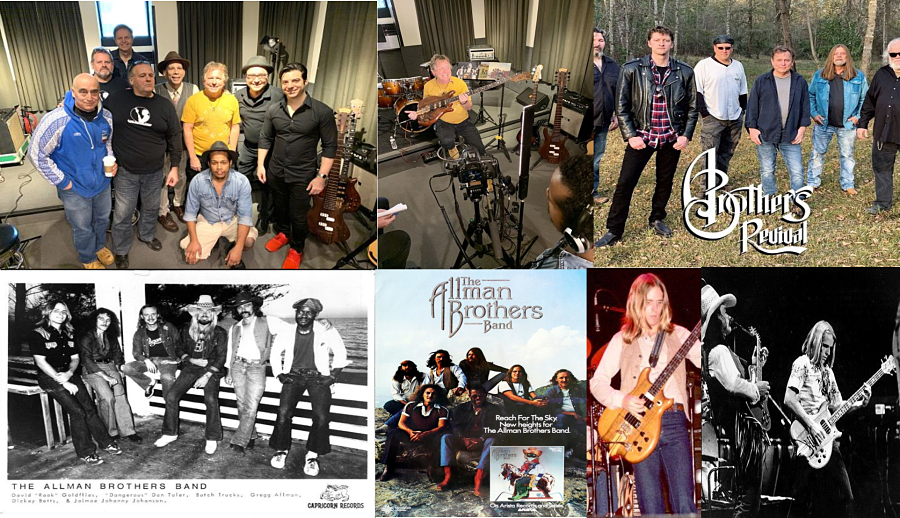