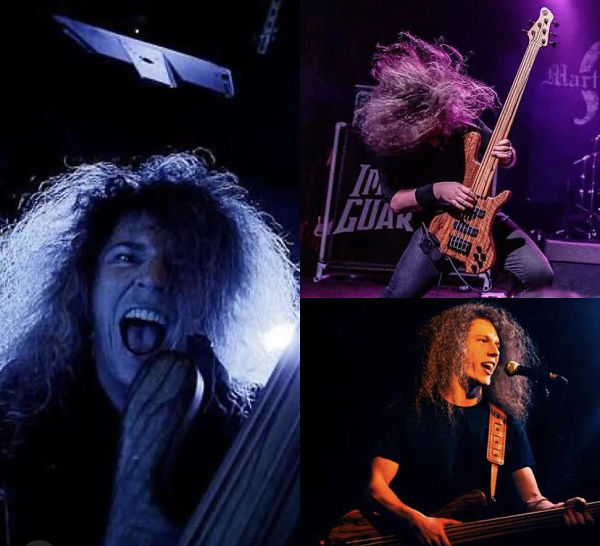 Know that name. Know that bass player. Because Thad Stevens is one of the best bassists on the Austin Underground scene right now. He is a dedicated fretless player with a wide range of abilities that allows him to be somewhat of a chameleon in the jungle of bands in Austin.

Thad got his start at a relatively young age when he was in middle school. His brother played guitar and when a family friend offered to sell a bass, Thad took a stab at it. With a little background in music from middle school, the interest for Thad to play the bass was immediate, if only diversionary, at first.

Coming up during the post – grunge era, Thad was influenced early on by bands like Alice In Chains but was also drawn deeper into bass playing by listening to Steve Harris of Iron Maiden.

The music of Pink Floyd got Thad deeply interested in the sound of fretless bass. Listening to Death (and Steve Di Giorgio) helped Thad understand and love melodic bass playing in a metal context.

Thad’s bass career really started when he joined local Austin prog metal heavyweights Ethereal Architect. It was with this band that he was able to really showcase his range on the fretless bass in a setting of complex arrangements with broad melodic structure. The regimented style of Ethereal Architect helped Thad to really refine the style of playing fast and in tune on fretless.

Thad went on to play with Immortal Guardian and Descendants of Erdrick, continuing to explore his opportunities to add his fretless sound and style to a metal context.

Thad currently plays with local Austin hardcore behemoths Böndbreaker. “I really like playing with Böndbreaker because it allows me complete freedom to play my style while engaging in and promoting a message that I feel is important and worthy. It is very fulfilling” says Thad. He also plays with singer/songwriter Amanda Lepre. This provided him with the opportunity to learn to play in a “less is more” style, playing to the song so as not to be overbearing in a lighter musical setting.

Thad Stevens really can play just about anything. He is a musical chameleon with the ability to play a wide range of genres with a unique sound and style. You should definitely know this bass player.

Thad is an endorser of Clement Basses by Tom Clement of Florida.

Who are Thad’s influences? There are too many to mention. But he credits Doug Kaiser of Wrathchild, Lars Norberg of Spiral Architect, Steve Harris of Iron Maiden, and Geddy Lee of Rush as being his primary influences.

Thad with Descendants of Erdrick: https://youtu.be/WSFH2G0nXqM