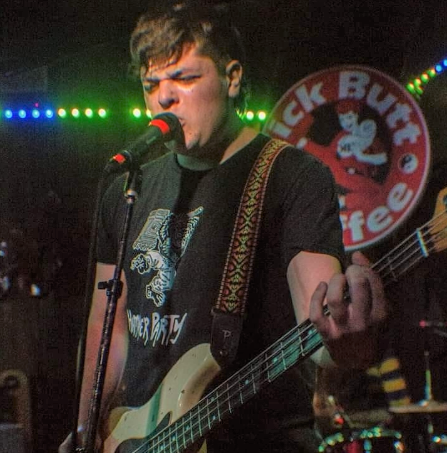 Punk rock is an integral part of the evolution of music and Rock & Roll in particular. There are numerous bands who have been influenced by the sound of early punk rock and allowed that sound to develop into something completely new (just listen to the early Iron Maiden recordings to hear how British punk turned into British metal). But it is a sound that has endured numerous decades, still holding true to its roots. In Austin, Texas punk rock has been alive and well since the 1980’s and continues to thrive to this day.

Gee Patino is the bassist for Jankem, a new punk band in Austin, Texas. Jankem is an extension of a punk band formerly known as Splif. Founded some years ago, (specifics aren’t needed because punk rock doesn’t care, it just is) Splif was formed with Gee as a founding member when he was 22. Originally a guitarist, Gee was forced into the role of bassist out of necessity (how often does that happen?) and he gladly accepted because, in his words, “Fuck yeah, it’s got two less strings and I get to make that thumping sound!” I mean, isn’t that really why we all play the bass? The honesty of our mission is distilled in that sentence.

What’s interesting about Splif is that their influences reach deep into prog rock. Their drummer, Mitchell, was heavily influenced by the likes of Genesis, King Crimson, Rush, et al. Gee was bringing the harder influences of The Minutemen (Mike Watt) and Fugazi. Splif guitarist, Anthony, brought along classic rock influences of Led Zeppelin et al. The result is a blissful, raucous mix of crazy musical arrangements paying homage to their influences while having the absolute irreverent blast a punk rock band should have. Sadly, the impact of COVID-19 brought Splif to an end when their drummer had to exit the band.

Gee and Anthony kept working together. When they found a new drummer it was their decision to start the band anew. While Jankem still pursues the adventurous music started in Splif, they didn’t want the new drummer to feel confined to old material so everything is new. And Jankem is out of the gate in ATX having played their first show in March 2021 and continuing regularly to show the underground scene that they are here to, first and foremost, party, and then rock the house.

Gee is a humble bassist. He freely admits that he knows nothing of technique or music in general. He plays by ear and by what he feels, working closely with his bandmates to get the sound he needs. Gee also freely admits he doesn’t know anything about gear. Most (if not all) of what equipment he plays has been borrowed or bought as cheap as possible. “Dude, I’m not gonna spend $4000 dollars on gear to get fucked up and party with it.” By my reckoning, this is sound reasoning.

Jankem plays loud and obnoxiously, but they still respect the music they write and the music they listen to. Gee says, “We may not know a lot but we feel that we are good musicians for what we do. And we respect the musicians who work really hard at their craft. We love to listen to all kinds of music, and Jankem wants to draw from that. We keep an open mind. Good musicians have good taste.”  Jankem is doing what all musicians should strive for: they have fun.

So who are Gee’s two biggest influences?

Bass: No Name Jazz style bass that plays really nicely. Gee says he got it for about $20 or so.

Cab: “What cab are you running it through?”

Jankem, ladies and gentlemen, are punk rock at their core. 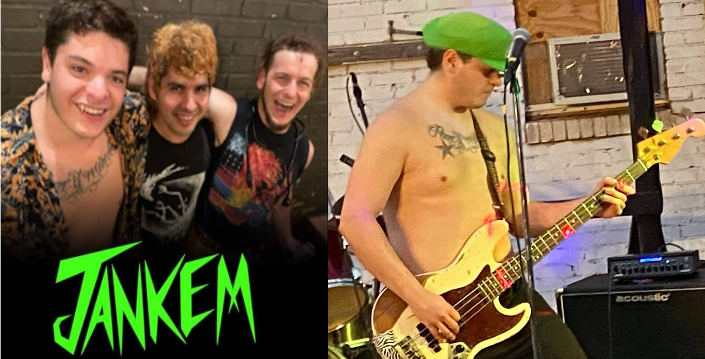