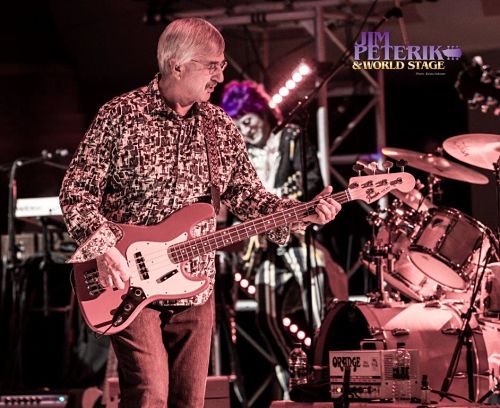 Chicago’s Ides of March, together since 1964, and still rolling, may very well hold the record for longevity.  The band still includes its four original members:  Bob Bergland on bass guitar, sax and vocals; Jim Peterik on lead vocals, lead guitar and keys; Larry Millas on rhythm guitar, bass and vocals; and Mike Borch on drums and vocals.

In the midst of the British Invasion, the Ides formed in Berwyn, Illinois, and took a name that had a British ring to it.  To top it off, some of the Band’s early 45s were issued on the Parrott label, the same label that had The Zombies, Them, and other British acts.

Before being struck by The Beatles on Ed Sullivan, Bob was entranced by the folk music of the day, including Peter, Paul and Mary and The Kingston Trio.  In grammar school, Bob took piano lessons, and played clarinet in the band.

Between his band experience playing with others, and his love of the folk music groups playing guitars and harmonizing together, he decided he wanted to play acoustic guitar and sing harmony in a band. For his 8th grade graduation, his parents got him an acoustic guitar.  Like many of our experiences, the guitar headstock did not include a name, and the strings were high off the fretboard, but that didn’t deter Bob from grabbing a Mel Bay book, and teaching himself chords.

In 1964, Bob got a call from Larry Millas, who had an electric guitar, and he was asked the question he had been waiting for—do you want to join my band?  Bob said yes, and then there were two, Bob and Larry.  They had seen Jim Peterik, one of their schoolmates, in another band, and he was not only singing and playing an electric guitar, but he was playing barre chords!

After some prodding, Jim showed up at a rehearsal, and as they ran through some Beatles songs, the playing and vocal harmonies meshed, and Jim was in.  With Bob being the only one with an acoustic guitar, he went out and bought a six-string Danelectro bass, and he hasn’t looked back.

By 1966, the Ides’ first single “You Wouldn’t Listen” was receiving a lot of airplay in Chicago, and nationally.  The song is considered one of the classic songs to come out of the Garage Band era.  The band followed it up with multiple singles, and in May 1970, after adding horns, had the No. 1 single on Cash Box, and the No. 2 single on Billboard, with “Vehicle.”  The song still gets airplay today, 50 years later, and is immediately recognizable based on the distinctive horn intro.  One year later, the band had another hit with LA Goodbye.  Several albums followed, and the band continues releasing records today.

As to Bob’s bass guitars, the Danelectro quickly gave way to a 1960 Sunburst Epiphone Rivoli with Banjo tuners, which was sold to one of the Byrds’ latter-day bass players, while the Ides were on the road.  At the height of the Ides’ popularity in the late 60s and early 70s, Bob’s road bass was a ‘65 Charcoal Frost Fender Jazz Bass, which he still owns. His current go-to bass is a Dakota Red Vintage Reissue Fender Stack Knob Jazz Bass.

He also has a Dark Blue 5 String F Bass, made in Toronto, Canada, where the wood removed from the body while it is being routed, is used to create a wooden pickup cover.

On the Ides’ 2019 CD “Play On,” Bob recorded with a ‘59 Fender Precision Bass, a ’66 Fender Jazz Bass, and a ‘73 Guild Starfire.  Other basses in his arsenal are a ’66 EB2D bass, a beautiful ’73 Rickenbacker 4001 bass with the checkerboard binding, and his latest acquisition—a 1960 Stack Knob Fender Jazz Bass.  Bob’s playing style is aggressive with a pick, but he tailors his approach to the song.

Over the many gigs the Ides have played, Bob has two favorites.  One, where the Ides were on a bill in Winnipeg, Manitoba with Led Zeppelin, the Iron Butterfly and Youngbloods, and the paper reported the next day that the Ides had stolen the show.  Another favorite show was at the Symphony Center in Chicago. The band entered from the rear of the Symphony Center, walking through the audience playing the intro to “LA Goodbye,” and received a standing ovation before it hit the stage.

These days, you can catch Bob and the Ides of March, as they still perform regularly.  However, since the band was formed, Jim Peterik ended up being a principal songwriter and founding member of Survivor (he co-wrote “Eye of the Tiger” and many of that band’s hits), and he has written hits for many other bands/artists, including 38 Special, Sammy Hagar and The Beach Boys.  So, now when you see the Ides, you get to hear the band play Ides songs, as well as songs Jim has written that were hits for other bands.

John Entwistle – I was lucky enough to see him play with the Who live once. Best bass solo I ever heard…..just amazing. Just listen to My Generation. The first time I heard that song, I said “who is THAT guy?”

Leland Sklar – On the opposite end of the spectrum, his parts always fit the song, and he played on so many great recordings. A master of not overplaying, yet making the rhythm section still stand out.

James Jamerson –  What skillful and inventive parts…all played with one finger on the right hand. His bass playing drove the Motown sound. I can’t imagine all those hits without James’ parts. And when The Ides were starting out and playing covers, learning his parts taught me so much.

Wayman Tisdale – Took the bass to a different level, popularizing it as a lead instrument in the Contemporary Jazz genre.

Check out the bass lead under the acoustic guitar, measures that stand out.

This 1971 recording was monumental. Too long for radio play, but it was stellar, with changes as in a symphony. Both the vocals and the instrumental components are outstanding.

An appropriate song for a band with the longevity of the Ides.

For a twist, Bob blows sax on this horn-driven classic.

The Ides joined by Mark Farner.