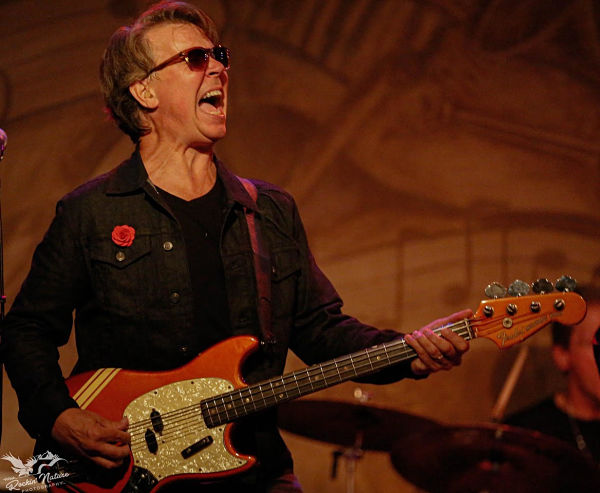 I started taking piano lessons from Sister Celine in first grade, then started playing saxophone in fourth grade. In eighth grade a couple friends asked me if I would play bass with them in their family’s basement. The guitar player brought a bass for me – I think it was an “Ames” EB3 copy – and I borrowed my brother’s keyboard amp.

I didn’t know how to hold the instrument but the guitar player showed me a few things and we were off. We played for hours, recording some of it to the kind of cassette recorder that was used in grade school to practice reading out loud. When I got home, I played the tape on my parents’ stereo and thought it sounded pretty good. (I was wrong!). The next year in high school the same guitar playing friend, my keyboard playing brother, and some older kids asked me to join their band. They didn’t look to me because I had any talent, there just weren’t any bass players around. I had access to that cheapo bass and an amp, and my parents were cool with the band rehearsing in our basement (maybe that’s why they asked me to join?!?!).

Not long after, we replaced the drummer with this kid Brad Nye from a neighboring high school who could play AND sing. I went on to play with Brad (aka “Dick Holliday”) for the next 15 years in our band Dick Holliday and the Bamboo Gang, and still work with him when opportunity allows.

I took piano lessons into 9th grade. It’s a given that if you study piano, you learn to read music. Learning saxophone added more hours of study and practice – in theory – to my week: I wasn’t diligent about practicing but worked on it enough to get through rehearsals and performances without incurring the wrath of the band director.

After high school I decided that I wanted to become a “studio musician” so I enrolled in Musicians Institute/BIT in Hollywood, moving there with my high school drummer friend, Brad. We had a strong international class at MI including Oskar Cartaya on bass and Frank Gambale on guitar.

There was so much talent in that tiny school that I could learn a lot just by hanging out. I played for hours, day in and day out. Being around great players and playing a ton is a pretty good way to take an inventory of your skills and shortcomings. After graduating MI, I continued studying music performance at NIU where I studied/played upright in orchestra, played electric in the Jazz Lab Band and small ensembles, and wrestled with Baritone sax in concert band.

Bass players who influenced you:

1985 – Formed Dick Holliday and the Bamboo Gang with Brad Nye and Grant Tye (guitar; an MI classmate) and Greg Marsh (drums). The band toured the US extensively also performing in Mexico and the Virgin Islands. Notably, DHBG shared bills with Mel Torme, Alice Cooper, and Tammy Wynette – the band still performs a few shows every year.

Early ‘90s – Recorded and toured with Survivor. Since leaving Survivor, I have continued as a member of Grammy winning songwriter/producer Jim Peterik’s rhythm section, recording and performing for 30 years… and counting.  Jim was a founding member of Survivor, and was involved in writing hits for Survivor, 38 Special, and many other artists.

Currently recording and performing with the Jay O’Rourke Band (Jay was a member of the Chicago band The Insiders and is a massively prolific songwriter, brilliant guitar player and producer. I think we’ve recorded and released six full length discs in the last four years).

I’m also performing with chanteuse Lisa McClowry’s production, The Beat Goes On – CHER Tribute show. Her rendering of the iconic Cher – vocally and visually – is stunning (and audiences go absolutely crazy for this show)! Lisa’s band includes longtime Jim Peterik bandmates Ed Breckenfeld (drums) and Mike Aquino (guitar). I do a handful of shows with the Zimmermen – a righteous nod to all things Bob Dylan; and occasional Dick Holliday shows. With Jenny Bienemann and Friends I accompany haiku-laureate Jenny and her singer-songwriter showcase every month at Fitzgerald’s. And there’s reliably something going on with the prodigious, indefatiguable Jim Peterik – recording his new songs, performing with his Survivor-esque band Pride of Lions or prepping for his annual World Stage show (now in its third decade).

Your go-to basses back in the day, and now:

Back in the day, Ibanez Musician. Then Sadowsky. Then Lakland Joe Osborn 5 string. Nowadays, Sandberg California VM (4 and 5). Throughout, I’ve relied on a variety of Fender basses – 4s, 5s, passive and active.

Back in the day: 1965 Fender Bassman with matching 210 cab (my first amp that my Mom bought for me; still have it!). Then an Acoustic 220 amp, with 406 cab (215). With Dick Holliday 2 Electro Voice fifteen cabs and a Hartke 410 with Crown Macrotech power and Ashly SC40 preamp: A lot of wattage and weight (silly in retrospect, but it sounded good!) Then a Trace Elliot stack. Nowadays, an Ampeg 610HLF with Markbass head.

A description of your playing style:

My style – such as it is – is to give the artist/writer/producer what they think they want; to show up with the right bass, in the right head space, and service the song.

I have been fortunate to divide my time between the stage and the studio, and have appeared in front of the camera on Late Night with Conan O’Brien (Michael McDermott), The Tonight Show with Jay Leno (Chris Young), Soundstage (Jim Peterik/38 Special/Van Zant/Ray Parker Jr/Mickey Thomas/Martha Davis), and the network television series CUPID (Lisa Loeb).

For more information go to www.klemhayes.com

“Bigger Than You Think” https://soundcloud.com/bamboo-gang/bigger-than-you-think