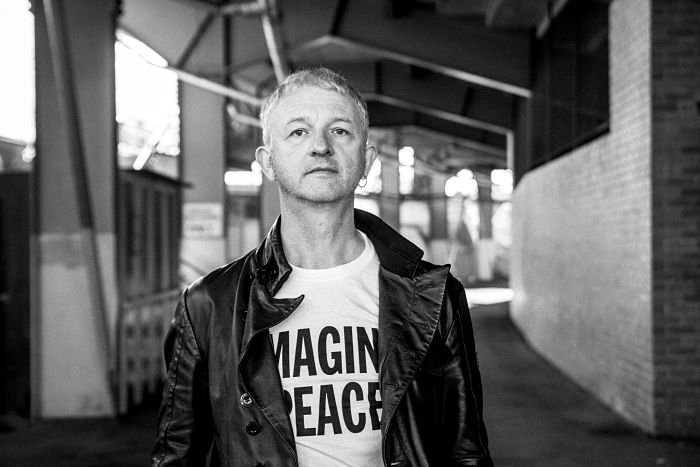 I recently discovered that I first became aware of Andy White back in the hazy daze of 1986 or thereabouts. ‘Twas a time when independent emerging artists garnered airplay thanks to Long Island radio stations, most notably WLIR-FM. Let the facts be known to a younger generation that while New York City corporate broadcast outlets were still spinning CSN&Y and Abbey Road incessantly, it was the suburban motley that broke new artists in that era. Tracks from Andy’s refreshing debut Rave On peppered the indie radio playlist among U2, Echo & The Bunnymen, The Cure, Siouxsie & The Banshees, Big Country, the former Declan Patrick MacManus, and that loveable older gent with the fancy threads- Bryan Ferry, to cite a few.

As a working (i.e., starving) bass player I was mostly employed by singer songwriters toiling on their demos in an attempt to nail the holy grail of stardom (and survival) known as “the record deal” with an “advance.” Or a production deal. Or a publishing deal. GarageBand and Pro-Tools had yet to bring recording technology into the bedroom. If you wanted to make records or compose songs for other artists to make into hits, you had to play instruments in a real studio with real musicians which cost real money! Fortunately for yours truly, the artists I anchored had sugar daddies (and sugar mommies), hence I could maintain a Manhattan roof over my head and choose from any (reasonably priced) variety of cornflakes for sustenance.

I was always attuned to singer songwriters whose bassists had a bit of what I referred to as “muscle.” That is, players who brought rhythm and harmony to the music. In the singer songwriter realm, bassists are often buried in the mix and adhere to the simplest of patterns in deference to their host. Of course, there are exceptions – Bruce Thomas with Elvis Costello’s Attractions, Andrew Bodnar from Graham Parker & The Rumour, and the master: Norman “Faith & Grace” Watt-Roy in the service of Ian Dury. Kudos to the singer songwriters who allow their bassists room to breathe – and grab the listener!

Enter Andy White in the Reagan / Thatcher years – and beyond as we will soon learn. When I heard tunes from Rave On and Kiss the Big Stone (1988), I made a mental note to check out the bass player. Andy’s tracks have a feeling of immediacy. Aside from the brilliant lyrics and melodies, the bass brings you into the music.  As I recall, I got ahold of Andy’s work on a medium known as the “cassette” during one of my UK sojourns.  Primitive yet portable, those pesky polyester-type magnetic tape cartridges were packaged rather cheaply, oft times with no musician credits. Mission not accomplished, but not forgotten.

Fast forward to 2020 and I hit upon ALT, the overlooked “supergroup” of Andy, Liam O’Maonlai of Hothouse Flowers renown, and Tim Finn – the driving force behind Split Enz and a rather amazing solo artist and collaborator in his own right.  ALT waxed a gem of a studio slab Altitude (1995) which flew under the radar amid the grunge (no hooks / no problem) onslaught. Tapes from their live show recorded at the legendary Tramps club in New York City (you know, that market which continues Who’s Next in heavy rotation) has just surfaced on streaming services.  As you would expect, fantastic compositions, expert melodies and vocals. And the bass! It reaches out and moves me.

I recognize from their press materials with credits (!) that the bass player is…Andy White! Wait, what? The cat on the Andy White album covers? The poet? The author?

Let’s get to the bottom of this!

(Note the interviewer’s few factual errors – despite painstaking research on Discogs.Com, AllMusic.Com, Wiki, and assorted blogs and websites – have been retained for authenticity!)

You’ve got plenty on your plate as a singer, songwriter, recording artist…why add bassist to the mix?

Bass is my first instrument. I started playing bass before singing or playing guitar. I was about 13 … double bass, then my teacher said I could borrow his Precision if I stood in for him on a gig. I fell in love with the four strings (never five) and that was it, really! It’s the only instrument I think I can actually play and – along with the vocals – the key element for me in all of my albums. Which is why I am so glad someone has finally asked me about it!

My educated guess is that your approach to the instrument is that of a “song player” – that is, a bassist who primarily works the pocket to serve the singer, the song, and the melody – thoughts?

See above, no, it’s a really important part of the song for me. I can only play a few chords on guitar, the most important part is the bass, even if it’s a simple riff which doesn’t change during the whole song listen to Time is a Buffalo in the Art of War or it becomes the most interesting instrumental feature ..maybe All It Does is Rain…

Time is A Buffalo in the Art of War Promo https://youtu.be/2aR52gythos

“All It Does Is Rain” https://youtu.be/UlXti-oFMI0

Many of the bass passages on your albums use a keyboard as rendered by your collaborators Rod McVey, and Ingmar Kiang

Err.. not really. There are some. Rod? Which tracks? He’s an amazing musician who can play any instrument any style in his own particular way. He does play a great bass guitar track on Palaceful of Noise and I think some synth basses on Destination Beautiful. We’ve always used samples and electronics ever since the first album – even though because it’s got an acoustic guitar on the cover most people don’t realize it. Ingmar – no, just a synth bass on a track on Teenage overdubbed during the mix.

My favorite Andy bass tracks include “Hanging Around Wit’ You” with Bruce Thomas of Elvis’ Attractions, and Crowded House anchor Nick Seymour (“Let Me Be Free,” “Hysteria”), and session horn player / bassist Nicky Scott (“Come Down to the Sea”)– how did you come to collaborate with these fine players?

I grew up listening to Bruce Thomas’ basslines on This Year’s Model and Armed Forces. Of course my favorite bass player was Paul McCartney, but it was exciting that one of ‘our’ bands had such a great bass player. Also, Norman Watt-Roy (Ian Dury and the Blockheads). Punk was a big deal in late-70s Belfast and I still carry that attitude with me today. My PR guy for the first album used to work for the Attractions and put us in touch. It was amazing to play with Bruce and Pete. Especially seeing the drama they put into a performance and Bruce’s bravery going up the neck.

“Hanging Around Wit You” https://youtu.be/6hjNGhzHUFQ

“Let Me Be Free” https://youtu.be/LuKnkpqj7YY

“Come Down to the Sea” https://youtu.be/BetbK0M3mXs

Nicky Scott I’ve known since I was at school, along with Rod McVey, So glad to have him on a track. Both are in this TV performance of “Message to You” https://youtu.be/i-T4tuPVSOY

Nick Seymour lived very close to where we recorded that album and popped in to play a couple of tracks with his Telecaster bass. I knew him through Tim Finn and hanging out in Dublin. What a great player – again, he doesn’t always start on the root note and I loved how he meandered down the neck. As with the other bass ‘guests’ it was a case of asking them and their personality to take part in the record, and to play something I wouldn’t have thought of.

Fantastic bass passage on the track “Understand” (with Liam on keys and backing vocals) was that you or Nick?

That’s Robbie Malone from Dublin who went on to play in David Gray’s band. Great bass player and friend. We’ve been in Italy, we’ve been in Galway, we’ve had coffees in a Melbourne laneway.

“Understand” / How Things Are promo https://youtu.be/Ik5i4bPQDGU

On Destination Beautiful you commandeer the upright (“She Doesn’t Want You Anymore”) – a difficult task requiring intense study or did you simply busk it?

See above, I’ve played double bass since I was at school though it would take me a long time to read a part now. After listening to Astral Weeks – sure – show me the way to the double bass! My double bass is on ‘One in a Million’ on the latest album. The track you mention is on bass guitar but there’s a double bass track on nearly all the albums – try ‘I Will Wait’ on the first. More on the recent ones since it’s actually there in the studio beside me.

And on the topic of upright players, you’ve got the great James Blennerhassett working the doghouse and electric (fretless) on Himself – most notably (to my ears) “Six String Street,” “Birds of Passage,” “St. Patrick Good Luck,” “The Whole Love Story” – comment on his contributions to your work on that album.

Yes, James is a master of the art. His best track is You and Your Blue Skies on my second album on double bass.

“You and Your Blue Skies” https://youtu.be/-8akCGwAkxo

My guess is that your bass of choice is the Fender Precision?

Yes, a 70s one I bought when I was about 16 or 17 from Trevor Hutchinson, who was both the tallest and the best bass player in Belfast when I was a teenager. He was in the Waterboys and later a wonderful group called Lunasa. It was fretless then, for a while had frets, and now is fretless again. Jaco style pick-ups and a phase switch I have never used – both appeared in the 80s. Same strings as when I bought it. Seriously.

I also have a reissue Hofner ‘hand’ made in Hamburg and a great Squire Precision, copy of an early 50s model (like Sting’s). This is the most reliable and easy to play of them all. Sounds incredible – always. I dread changing its strings someday. Oh and last year I bought a short scale Danelectro-style bass for fun – made out of a door. Thought I should have one roundwound sound to reach for it’s fun and raspy. 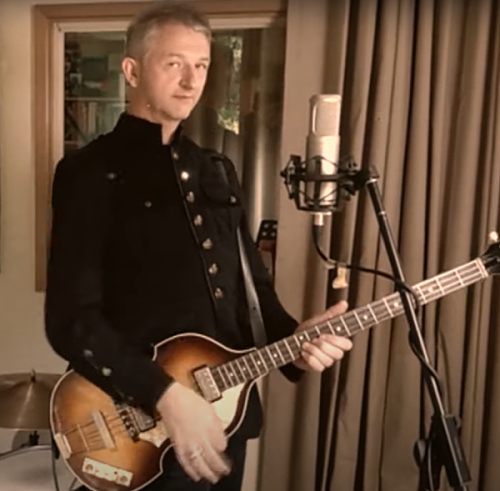 On the ALT Live At Tramps album – you’re playing bass and singing – how do you balance the two as the melody and bass passages are often at odds?

Most difficult thing in the world – especially harmonies. Respect to aforementioned Sting and Macca.

Andy White full time bass player? If you got the offer from BTS, Beyonce, Rhianna would you take it?

Songwriting is only a sideline, it’s all about the bass!

Much thanks to Joan Myers / Myers Media! 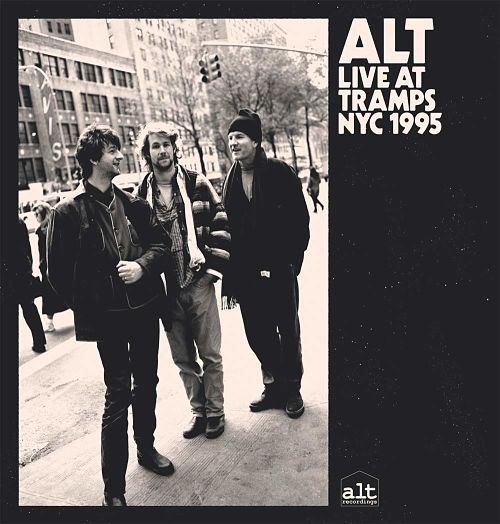