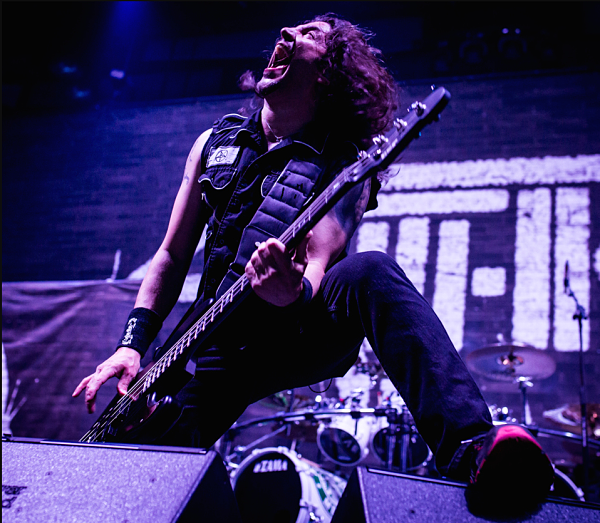 Inspired by hard rock flesh-on-the-string heroes Geezer Butler, Steve Harris, and Geddy Lee – Bello forsook his role as an Anthrax roadie for the bass chair in 1985 for the band’s classic second slab Spreading the Disease.

A master riff and pocket player, Bello is a spirited proponent of our instrument, appearing in numerous forums and clinics discussing topics ranging from gear, to playing approaches, to notable bassists.

In addition to his role in Antrax, Bello’s side-projects include Altitudes & Attitude with Megadeth bassist David Ellefson wherein Frank croons and plays guitar with more of a melodic bent than his day job ensemble.  He also briefly toured with alternative metal / noise-rockers Helmet circa 2004, but never recorded with them.

A part-time thespian, Bello has acted in film; Greetings From Tim Buckley wherein he assumed the role of another bassist – Richard Hell and television episodes of Law & Order. Frank is also active in the philanthropic organization Kids Who Rock – donating his time, educational expertise, and musical instruments.

Bello is planning to release his debut solo slab in 2021 on the Megaforce imprint. His band Anthrax intends to unleash its next studio platter next year.