Who’ll walk me down to church when I’m sixty years of age, when the ragged dog they gave me has been ten years in the grave…

To my baby boomer generation, the live album revealed the true mettle of a rock and roll recording artist.

The mercifully truncated single concert slab or the more exotic and oft bloated twofer or threefer or monstrous four-fer*, replete with gatefold and perhaps a poster, was a treasured keepsake for those of us who experienced a band on stage.

And for those too broke to purchase a ducat and thus never had the chance to witness such an event, it was a testimonial to the power of the music rendered in the moment.

Relatively easy and inexpensive to produce, record, release and generate cash for the record company and to a lesser extent, the artist – the live album remains a godsend of the rock era.

The self-indulgence, pomp and circumstance, and sheer majesty of such collections – usually enhanced with overdubs (try singing and playing in tune every night on a grueling tour) and augmented crowd noises, is to be treasured.

The extended jams, the occasional re-arrangements, muddy mixes, medleys, musical missteps, and sheer bloatedness and gargantuan excess of the platform merits endless celebration – simply because if rock and roll is indeed the art-form of “over the top-ness” so be it the live album as its enduring monument.

Bombast be thy name.

Note that bands / artists that “couldn’t really play” abstained from such exercises. We knew who they were and respected the fact that they stayed safe and sound in the studio. ‘Twas not until the compact disc era wherein latter-day money mad record labels unloaded everything from demos to phone messages (referred to as “bonus tracks”) on the market wherein entities who had no business cutting concert collections were afforded live albums. I hereby dismiss them.

Regardless, it is a medium that belongs to us. By the 1980s the live album was mostly archaic – reserved for jam bands and the like. In the 1990s with the (mostly) low-level musicianship of the alt-rock genre, live albums descended into historical documentation status. Mere product. By 2000, the game was over.

The list of rock artists (and I’m being strict here, no disrespect to James Brown, Johnny Cash, Miles, Aretha, or B.B. King to cite a few who have cut influential seminal live sides) whose concert recordings which wore out on the turntable is, in a word, astounding.

Yes, we listened to these albums!

Forgive me if I’ve omitted your favorite….

Originally a WABC-FM radio broadcast from A&R Studios in New York City, the gig was never intended for a release. However, given the flood of bootlegs circulating, along with Elton’s rocketing popularity, MCA Records decided to put out an official version. The 80-minute concert was edited down to 48- minutes in a new running order. It appeared on retail record and 8-track racks April 9, 1971 as a single platter.

11-17-70 could be considered the birth of the piano power trio. Drummer Nigel Olsson, bassist Dee Murray, and Sir Elton ripped through deep cuts from John’s repertoire, which at the time included two American slabs,  along with a few contemporary covers. Their improvisatory disposition merits comparison to Cream, the Allman Brothers, or a small jazz ensemble led by Miles, ‘Trane, or Bill Evans.

The live interpretations hardly resembled Elton’s orchestrated studio renditions – which, for some reason, were cut with studio cats and not this agile road band.

By this juncture in their career Elton, Nigel, and Dee were a seasoned outfit, riding the wave of the piano player’s first forays of fame and fortune. Forging a three-way musical dialogue, Nigel created a rhythmic anchor for Dee and Elton who expanded the harmonic boundaries of John’s compositions and Bernie Taupin’s cinematic libretto.

Murray worked a Fender Jazz, favoring the bridge pick-up, which cut like a knife yet retained the warmth of a traditional bass. I can’t help but think that Jaco heard these recordings and decided to try that tonal adjustment to his own liking.

On 11-17-70 Dee reveals himself to be a maestro accompanist. His deft meld of chords, arpeggios, chromatic runs, staccato phrases, sustained passages, and endless combinations thereof – to my ears, evoke comparison to Jack Bruce, James Jamerson, and Scott LaFaro.

But don’t take my word for it, listen to the album in it’s 1996 remastered, bonus track format:

“Bad Side of the Moon” https://youtu.be/ah9OS-ziAcI

“Take Me to the Pilot” https://youtu.be/cC1ocO0pVgs

“Can I Put You On” https://youtu.be/ZIp-gn3xmMc

Medley “Burn Down the Mission, Get Back, My Baby Left Me” https://youtu.be/I370NFAPt8E 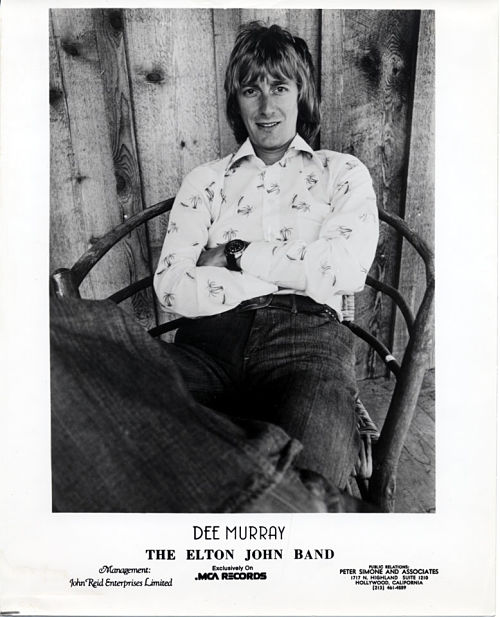