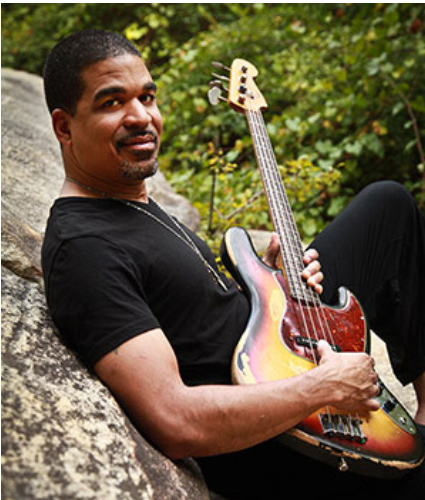 He is a virtuoso of the instrument, and among of the elite players in the jam band / improvisational fusion (jazz / funk / world) sub-genres. Oteil Burbridge started off as so many bass player do, on drums!

Recognizing his multi-faceted musical talents, Oteil’s mom encouraged her son (whose name translates as “explorer”) to investigate additional instruments including violin and trumpet. Honing his chops in his native Washington D.C. club circuit, Burbridge garnered national attention aplenty as the anchor of the experimental Aquarium Rescue Unit – an ensemble which  featured members of jam-band giants Phish, Phil Lesh & Friends, and Blues Traveler among others.

Burbridge took over the Allmans bass chair in 1997 following the departure of Allen Woody. He waxed the band’s final studio slab – the underrated Hittin’ the Note (2003) wherein he worked the five string and appeared and numerous live sets. To my ears, Burbridge’s work with the Brothers echoed Berry Oakley as Oteil was given to working the pocket which occasional upper register flourishes. Burbridge also took an occasional lead vocal with the band.

Among Oteil’s high-profile collaborations included Dead & Company helmed with Grateful alumnae Bob Weir, Billy Bill Kreutzmann, and Mickey Hart along with John Mayer.  He also joined founding drummers Butch Trucks and Jai Johnny Johnson in Les Brers. Burbridge also served as the harmonic and rhythmic anchor of the Tedeschi Trucks band – which garnered a Grammy as for Best Blues Album in in 2012 for Revelator.

Burbridge has recorded under his own name and as a bandleader – Oteil Burbridge and The Peacemakers. Among his notable session credits include Gregg Allman, Warren Hayes, Herbie Hancock, and The Zac Brown Band.

A truly diverse and prolific cat – keep up with Oteil at www.OteilBurbridge.com – gear heads be advised to check out OB’s extensive collection of basses – ranging from the trad-for to the six string…