Overend Watts: The Rock Star Who Hated Walking and Lived to Write About It! 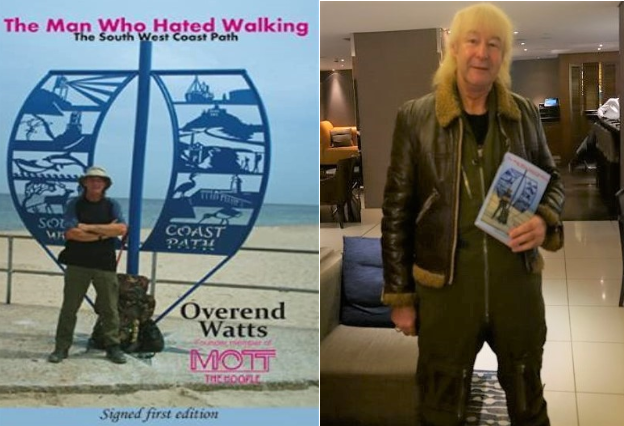 “A lot of books about people in the rock music business are boring to me…the drugs, the women…the bankruptcies…it’s all so repetitive. When I approached publishers and told them my story isn’t anything like that …it’s all about back-packing — they said ‘great!” – Overend Watts, Mott the Hoople

Though Mott the Hoople hardly achieved the commercial success of the innumerable bands they spawned — you can count The Clash, Def Leppard, and Wilco among them — their sacrosanct status in the pantheon of rock ‘n’ roll lore is time honored. Mott were the first band to headline Broadway (with Queen in support, no less) and their David Bowie-penned anthem “All The Young Dudes” defined a generation that urgently needed to separate itself from the idyllic hippie culture which permeated the early 1970s. Since Mott the Hoople’s untimely split in 1974, their albums have never gone out of print, nor has their relevance -top rock artists continue to name check the five lads from Herefordshire.

Mott’s chief singer/songwriter Ian Hunter, unquestionably in a peer group which includes such iconic rock poets as Bob Dylan, Lou Reed, and Patti Smith, enjoys an acclaimed solo career that spans nearly forty years. Guitarist Mick Ralphs’ fame and fortune as a founding member of Bad Company was no surprise — Jimmy Page inked Bad Company to Led Zeppelin’s fledging Swansong imprint and the rest, as they say, is history. And the fact that Mott, Hunter, nor Bad Company, have yet to be recognized by the so-called Rock ‘n’ Roll Hall of Fame — is outright heresy. Even Rush fans would agree!

However no member of Mott the Hoople embraced the joy, pageantry, and excess of the band and the era than bassist Peter Overend Watts. A silver haired towering figure atop platform hip-boots (which he also wore off-stage: “I couldn’t get them off after a gig!” ) whilst plying mighty riffs from his self- painted white Gibson Thunderbird, Watts would adorn himself in outrageous outfits that would render Lady Gaga and her minions ridiculously passé. Watts left the music business in the early 1980s and never looked back — not that he needed to, thanks to his dealings in antiques and collectibles for many years, among other endeavors.

Watts’ first official foray into “literature” — The Man Who Hated Walking, available now by way of Wymer Publishing — is a laugh-out-loud, riveting documentation of his 650 mile (actually 680 miles if you include Overend’s several missteps) two month journey of the South West Coast Path in 2003 — one of the most expansive way-marked long distance trails in the UK — spanning Minehead in Sumerset, along the coasts of Devon and Cornwall, to Poole Harbour in Dorset. That’s almost four times the height of Mount Everest — glam rock footwear not included.

Akin to those of us who fell in love with Mott at a young, impressionable age, Watts’ fascination with hiking stems from his childhood. “Back in the 1950’s I saw a lot of tramps in England…many of whom were War World II veterans. Perhaps they had shell shock. They were Dickensian characters. Amazing to look at, dressed in rags with great, big beards. I was mesmerized by them — what do they do? Where do they go? Where do they sleep? Where did they walk? So a little seed was sown in me — things do hit you harder when you’re young…they go straight to the heart.”

The Man Who Hated Walking officially commences when the self-proclaimed couch potato becomes obsessed with the idea of long distance walking in the midst of a late-night Cadbury Fruit & Nut chocolate induced viewing of Who Wants to Be a Millionaire? Host Chris Warrant’s interview of a contestant who had conquered the aforementioned Path inspired Watts — who normally rises at two in the afternoon — to embark on the journey of a lifetime.”If I had to crawl I would have done it!

Watts’ conversational tone and vivid descriptive narratives peppered with hysterical Brit vernacular affords the reader the feeling that they are indeed walking with the author every step of the way — through his arduous preparations; agonizing spells of foot and back pain; the numerous bouts of self-doubt; his moods of terror and triumph; Watts’ exhilarating scenic views; the wayward diversions borne of both nature and error (“You can’t get a mobile phone out when you’re stranded on a ledge…and even if you do, how are they going to rescue you?!”); awaking to pigs and ponies; insomnia; confrontations with batty bread and breakfast matrons; the rescue of a stranded swimmer; and the anxiety that comes with the myriad of hygienic and bodily function challenges in public restrooms and in the wild; just to list a few.

Among Overend’s various whacky encounters includes a happenstance summit with a German hiker desperately seeking the famed house wherein seminal metal rockers Deep Purple recorded their classic Fireball album in 1971 (which was released shortly before Mott’s far superior Brain Capers LP for those of you keeping score). When Watts, who never, ever reveals his rock ‘n’ roll pedigree, casually informs the gent of his Mott past — the torrid Teutonic trekker turns purple with rage, accusing the retired bassist of being an imposter! “That poor prog-rock bloke…I’ll never know if he found his house…”

Since Watts’ completion of the South West Coast Path, the author continues to traverse the UK by foot. In 2008 Watts completed a marathon 1,250 mile walk from Land’s End to John O’Groats in sixty-three days — a sojourn which incorporates The Cotswold Way, The Heart of England Way, Staffordshire Way, Limestone Way, Pennine Way, Cheviots, Grampians and Cairngorms.

“You only have one life to live haven’t you?” opines a jovial Watts just a few hours before Mott the Hoople’s final re-union performance at the 02 in London in November 2013. In addition to walking himself into physical fitness worthy of a man several years his junior, Overend is quick to note that the residual effects of his newfound hiking lifestyle included a healthy dose of self-discovery. “I found that I was more resilient and had more will-power than I thought…walking does that for you…it’s really simple, like Confucius said ‘just take it one step at a time, mate!” Well, in Overend’s world, the Chinese philosopher just may have been a scouser!

Mott Literary Postscript: Mr. Watts is not Mott’s sole scribe. I strongly advise readers of rock autobiographies to seek out a copy of Diary of a Rock ‘n’ Roll Star, written by Overend’s bandmate Ian Hunter, which was first published in 1974. Unlike the current crop of tomes composed by marquee rockers (and their ghost writers) who somehow remember everything that happened to them in decades past despite their massive intake of mind-altering substances that cause most addicts to forget what they did five minutes ago, Hunter’s book is an honest, illuminating, and entertaining portrait of life in a band on the road. And, Hunter also affords the reader great insight into the sartorial splendor of Peter Overend Watts.

My deep appreciation and gratitude to Peter Purnell of Angel Air Records and Mark Preston for helping me track down the most elusive rock star who ever walked the earth!