The Importance of Stanley Clarke 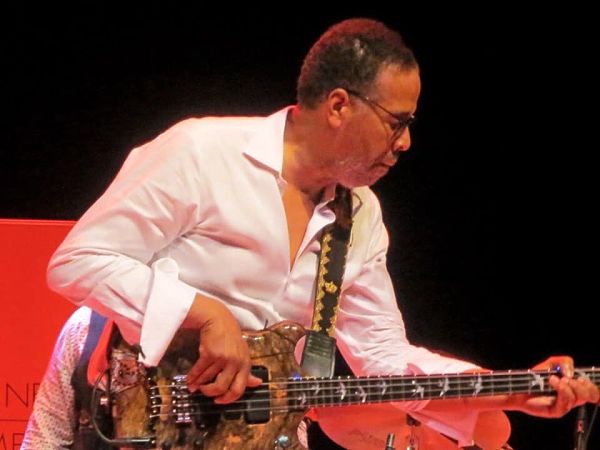 As I was witness, when Stanley Clarke emerged on the national music scene in the early 1970s the electric bass was not yet accepted by the jazz establishment. Perhaps it was because he also played the upright, perhaps it was due to the opened minded rock audiences of the day who gravitated towards electric Miles, Santana, and similar, or maybe the time was right for jazz to wake up to modern technology and young listeners….

Whatever the case, the jazz community paid attention to this Philadelphia whiz kid. Stanley applied the language of jazz to our instrument like no other before him. Note that Clarke was a product of his times – he was tuned in to Motown, the British Invasion, Philly soul, Muscle Shoals, and early electric jazz. He made no excuses for their influences in his music.  In fact, he celebrated the pomp and circumstance of pop music – both on record and on stage.  He was a star electric bassist – and remains so to this day.

In addition to his unparalleled technique and rhythmic and harmonic virtuosity as both an accompanist and soloist, and a prolific composer – Stanley fervently incorporated the languages of rhythm & blues, soul, funk, disco, and rock into to the jazz lexicon. By “legitimizing” those previously marginalized genres in a jazz context, Clarke profoundly changed American music – making it more inclusive, and more representative of the population.

Stanley’s canon, spanning his early days with Return to Forever to his extensive work in film soundtracks, to his innumerable collaborations are all worthy of exploration. He’s been cited by the Grammys, Bass Player, Downbeat, and various learning institutions with piles of achievement awards and honorary doctorates.  While we’re at it, Stanley Clarke is long overdue for Kennedy Center honors.

Stanley paved the way for Jaco, Victor Wooten, John Patitucci, Christian McBride, Marcus, Esperanza, Tal, and all the jazz lions and lionesses of the instrument who follow.  Rock bass icons including Chris Squire and Paul McCartney (who worked with Stanley) revere him.

As long as the electric bass exists on the bandstand and in the studio, players will debate who is the GOAT.  Fact: Stanley can carry the GOAT title in his back pocket!

He is the cat who kicked the door open to the evolution of instrument as we now know it. And he continues to celebrate the traditional role of the bass…

The most important electric bass player of all time? My vote goes to Stanley Clarke….

Paul McCartney: “Somebody Who Cares” https://youtu.be/miemM-xFqWw