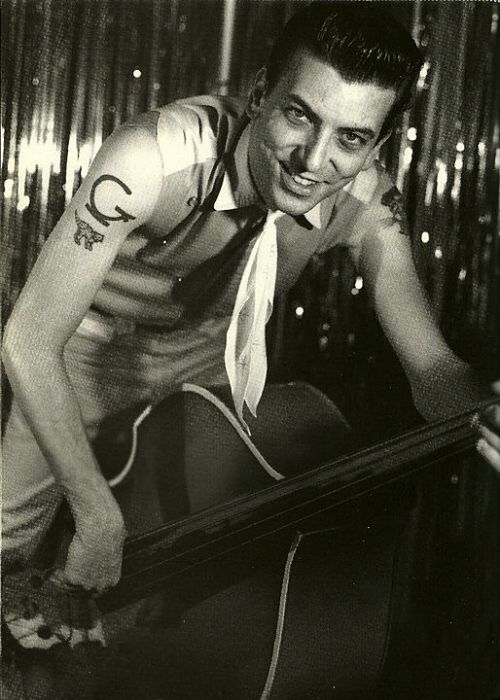 Anyone familiar with the Hee Haw TV show will remember comedian Junior Samples urging people to call BR5-49 to buy used cars.  Fast forward to the 90’s, and that became the name of a popular Nashville-based Americana band.

Jay saw the band and suggested that they add an upright bass player.  When the band could not find one, Jay bought an upright and joined the band.  While Jay had played guitar and some electric bass back home in Lafayette, Indiana, he had to become a quick study on the upright.  To get up to speed, Jay immersed himself in his record collection, listening to what was happening on records by Buddy Holly, Eddie Cochran, Gene Vincent, Little Richard, Elvis and Carl Perkins.  He also asked for tips from established bassists, including Dave Roe (Johnny Cash), Mark Winchester (Emmylou Harris), and Kevin Smith (Willie Nelson).  To his surprise, the message from each was the same—”I don’t know if this is right, but this is what I do.”

When Jay joined the band, the thought was to play for two- three weeks to see if it worked out.  The band took off the first night it played with Jay, and BR5-49 quickly established itself as the house band at Robert’s, where it recorded its first live album.  Large crowds were drawn by the band’s ability to mix its rock and roll, country, swing and gospel influences to come up with a fresh and energetic sound.  Champions of the band included Gary W. Tallent, bassist with the E Street Band.

In terms of Jay’s playing style, he believes less is more.  He loves locking in with the drummer and playing a Ray Price-like shuffle.  He focuses on how he and the drummer tie in with the rest of the band to move the song along, without getting in the way.  When it is a fit, he also goes for the percussive playing of Dorsey Burnette of The Rock and Roll Trio.  Other music heroes include Chet Atkins, Joe Ely, Nick Lowe, Johnnie Johnson, and Chas Chandler.

Jay left the band in 2002, and since then has focused on studio work, and post-production in the music video world.  His video work has led him to become the Multimedia Curator at The Musicians Hall of Fame and Museum in Nashville.

If you haven’t seen it, the Museum is a must see, paying homage to the musicians and songwriters, you have probably heard, but not seen, of every genre of music, not just country.  https://www.musicianshalloffame.com/

Some of the highlights of Jay’s career include:

Playing the gritty clubs on Lower Broadway before it became a tourist attraction, and living on tips.  This required musical versatility in terms of song selection and playing requests, as well as dedication and stamina.  The band’s song “One Long Saturday Night” reflects this time period, when every night seemed like a Saturday night.  https://youtu.be/d-WlaIRwGF4

Travelling the world, and playing in music halls where The Beatles played.

Appearing on many late-night television shows, including Late Night with David Letterman, Later with… Jools Holland, Late Night with Conan O’Brien and The Arsenio Hall Show.

The opportunity to meet musical heroes such as John Fogerty and Scotty Moore.

Becoming the Multimedia Curator at the Musicians Hall of Fame and Museum.  As a student of music, it is a perfect gig.  Plus, he gets to meet his record collection.

Jay’s first upright was an Engelhardt plywood bass that was great for touring.  His current go-to is a 1961 Kay upright.  For studio work, he also uses a Danelectro strung with flats, and a Gretsch hollow-body.

Our version of “Crazy Arms”

We were young and stupid to think that we could improve on Ray Price’s version.  I look back now and laugh about that.  But we had such a ball playing that one, that we put it on the phone album.  I mentioned in our chat that my wheelhouse was this kind of shuffle.  Our drummer and I could really lock in together on this stuff.

This was our most popular song when we played for tips at Robert’s.  We got so many requests for it that we eventually had to just play it once a night.  We started the ritual of playing “Opie” at midnight every night.  The crowd ate it up.  Don’t tell Andy…

“Six Days On The Road” https://youtu.be/lDvSoDyX388