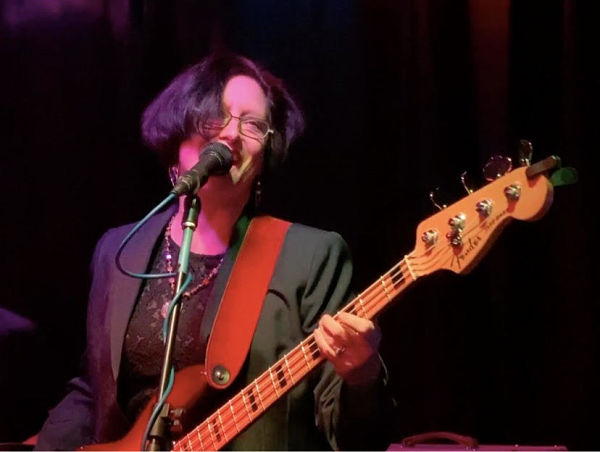 Laura Sterner is an accidental bassist. As a young girl she developed a deep love of singing and would work with her sister to create harmonies in the songs they would sing. And, like many budding young musicians, this set her trajectory to be a lifelong musician, for better or worse.

At the young age of nineteen Laura began to play bass. And, like many bass players, she began out of necessity, because who really wants to play bass, anyway? So she got her hands on a Gibson EB-0 bass and…absolutely hated it (the pickups in the old Gibson basses are famously referred to as  ‘mudbuckers’ because of their intense low frequency and lack of definition; it can be difficult to draw a pleasing or cooperative tone from them).

Nevertheless, she persisted. Laura continued to play in bands as a teenager and young adult. Being around the 1970’s and 1980’s Washington, DC club scene allowed her to develop a reputation as a reliable sideman(woman), and having the ability to sing and play at the same time helped her land enough gigs to stay busy in cover bands and original groups, too.

All that singing she did as a child also gave Laura a well-developed ear that allows her to easily adapt to many different styles of music. This paid off when she started to book sessions as a background vocalist, eventually landing a spot on Gayle Adams’s hit single “Love Fever” (landing at #24 on the Billboard Black Singles Chart and #7 on the Billboard Dance Chart). In turn, gigs like this allowed Laura to showcase her vocal abilities so that she could diversify her skills and work with a variety of groups in both live and studio settings, on both bass and vocal sessions.

After a couple of decades working in the business and seeing enough of the frantic sides of gigging and touring, Laura decided to call it quits around 1990. She left the Washington, DC area and moved to Philadelphia. But like any musician who has grown up singing, playing, and working in the scene, Laura became bored and chose to begin writing her own music. Any musician also knows that once you have the bug it is really hard to stop. Having such a diverse background in singing and playing, Laura was able to land a gig as a lead vocalist with a progressive fusion rock band called Finneus Gauge. Working with such a different sound really opened a lot of doors for Laura, not only in her singing and playing, but also her own songwriting.

The gig with Finneus Gauge was sweet but short. Cue another break in playing and singing. Laura made the trek west to California and landed a steady job at UC Davis as a research assistant and grant writer; about as far removed from music as one can get. But in her desire to compose, be it out of sheer boredom or a subconscious need to keep herself immersed in music somehow, Laura kept at writing songs and just playing around on her bass, but nothing nearly as serious as she had been doing in the past.

When 2014 rolled around Laura decided to start writing again, putting a focus on that skill with a toolkit of abilities she had gained through years of playing, singing, and writing with so many varied groups and through learning countless covers. She also decided to start getting out and playing bass again. The adage rings true in Laura’s case, that if you can play bass you always have a gig.

Laura has now been gigging steadily in the Sacramento, CA area (until COVID, at least) with no signs of slowing down. She plays with Empty Wagon and Almost Blue. She continues to write songs and put a lot of emphasis on that aspect of her skillset. Indeed, Laura really wants to be considered a songwriter. Playing bass was purely an accident. Oh, and she learns and plays everything, vocal and bass, by ear. Laura has a damn good ear.

In her own words: “bass, for me, has been a utilitarian thing. I started playing because it was needed and I kept playing because people wanted me to do it. But the creative aspect is pretty key for me. Bass is my main performance instrument and it always will be. I just love how it feels, I love the role it plays, I love the power it has. It gets me in the door to perform with an authority I don’t have as a singer and I love that. I love to perform and I love to write.”

Who is Laura’s favorite bassist? Chuck Rainey gets those honors for his chops, sensibility, and creativity. Tony Levin gets an honorable mention. (Not a bad pair of influences.)

“I Just Want Some Good News”