Jack Daly grew up in Troy, New York, an area renowned its diverse musical community. His uncle was a drummer. Jack’s brother was a guitarist and avid record collector who brought home influential albums by the Allman Brothers, Johnny Winter and Edgar Winter’s White Trash.

Initially, Jack thought he would be a drummer. However, he became bored with the practice pad, snare and cymbals he had. That jaded stance quickly evaporated when he was leaning against the home stereo with its 15-inch speaker blasting Chicago’s “25 or 6 to 4.” Young Jack was blown away by Peter Cetera’s bass lines, which inspired him to pick up the instrument.

Jack started out with a few lessons and learning from records and playing live. By his late teens he was studying with accomplished teachers and woodshedding twelve hours a day. From his teens to his late 20’s Jack played, composed, and recorded in multiple bands. He moved to New York City at the age of twenty-nine and within a year was playing in thirteen different bands.

A chance conversation with a bandmate led to a nearly fifteen-year run with Lenny Kravitz on world tours, multiple TV appearances, videos, albums, and DVDs.

Jack casually mention to that friend -on a Thursday- that he would be interested in playing with Lenny if he ever needed a bass player. The following Tuesday, Jack received a call saying that he had an audition in New York City with Lenny’s engineer Henry Hirsch. It was a cattle call, with about twenty players. Jack and one other bassist were flown to Los Angeles for another audition. Unbeknownst to Jack, the bass opening was advertised on the radio, and 250 bassists auditioned for the gig in LA—Jack nailed the gig!

Post-Lenny Kravitz, Jack stayed busy with session work, playing live, and producing other artists. He toured with Boz Scagg; recorded with David Bowie’s rhythm section; recorded and toured with Gedeon Luke and the People, coproduced and mixed that band’s LP, and appeared on the TV show Later… With Jools Holland with that band; toured with Dana Fuchs; toured Spain with Manola Garcia; and toured Germany with Marius Westernhagen. When Jack got back to the US, he toured with Darlene Love, whose record had been produced by Steven Van Zandt, and that led to him playing with Little Steven.

For the past 4 years, Jack has recorded and toured with Little Steven And The Disciples Of Soul, and he appears on the Soulfire and Summer of Sorcery releases, as well as the live CDs and DVDs. The band is a tour de force, consisting of multiple guitars and keyboards, along with three female background singers and a five-piece horn section. Jack has his work cut out for him in sonically providing a bottom and groove for the music, while being mindful of the music created by the rest of the band. Jack’s goal is to create bass lines that help make the song and the other players stand out and sound great.

With an extensive background as a first call session musician and having contributed to dozens of gold and platinum albums with many of the top artists and record producers, Jack has learned from the best of the best. It is a natural progression for him to work in production with his own studio.

For information about Jack’s production studio, and the extensive list of artists he has worked with as a musician or producer, go to https://www.jackdaleybassist.com

Jack’s basses: his first bass was a St. George copy of the Beatle bass, paired with a Fender Bantam bass amp. Next up was a Fender Mustang bass with the racing stripe, modified with a humbucker pickup, played through a bass cabinet Jack made with his Dad. He has accumulated several basses over the years, including a 1966 black Fender Jazz bass with matching headstock (flatwounds); a 1965 candy apple red Fender Precision bass (roundwounds); a 1997 black Fender Custom Shop P/J bass with matching headstock (rounds) that has custom artwork by Jona Cerwinske; a Music Man BFR Old Smoothie; a black fretless Music Man; a 1971 Rickenbacker 4001 sunburst (flats and rounds); a 1968 Hagstrom 8 string; a Hofner Club Bass with a custom black finish; and a Guild B50 acoustic bass. While Jack has often used a Fender Precision bass to record, he usually prefers his 1966 Fender Jazz bass or Music Man Old Smoothie for live shows.

A few highlights from many in Jack’s career, include:

Playing Radio City Music Hall with Lenny Kravitz about a week after he joined the band, with Robert Plant stage left, Joey Ramone, and other musicians Jack respects in the audience.

Playing H.O.R.D.E. Festivals with Lenny Kravitz, where the band did the whole tour on motorcycles, including riding them up to the stage.

Little Steven And The Disciples Of Souls’ last show of the “Summer of Sorcery” tour in October, 2019, before a sold-out crowd at The Beacon Theatre in New York City. I happened to catch that show, and words cannot describe the energy, power and ferocity of the band and music. 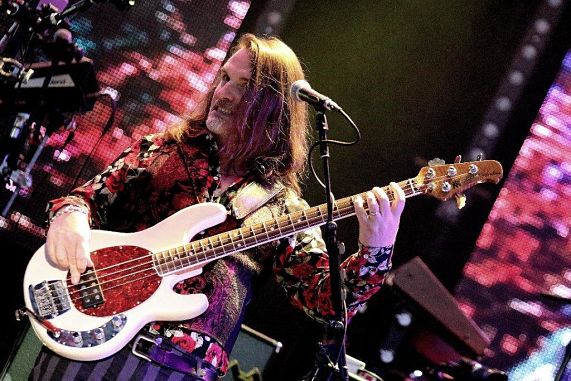 Jack worked this bass part out with Beyonce on a 5 string bass, and Beyonce said it was influenced by Fela Kuti.

This track has Jack capturing the vibe and doing some old school soul bass playing.

Sara Bareilles – “She Used To Be Mine”

Jack’s lines stand out and help move the melody, while supporting Jason’s vocals.

On this song, the tape started rolling, and Jack started playing. This was recorded in a spontaneous first-take.

Gedeon Luke and The People – Standing On Top Of The World

Little Steven And The Disciples Of Soul-“Summer of Sorcery”

This song is reminiscent of the E Street Band and Van Morrison. Interestingly, Little Steven muted the drums during one of the verses, and Jack’s bass continues carrying the song, and provides the platform for the drums coming back into the song.