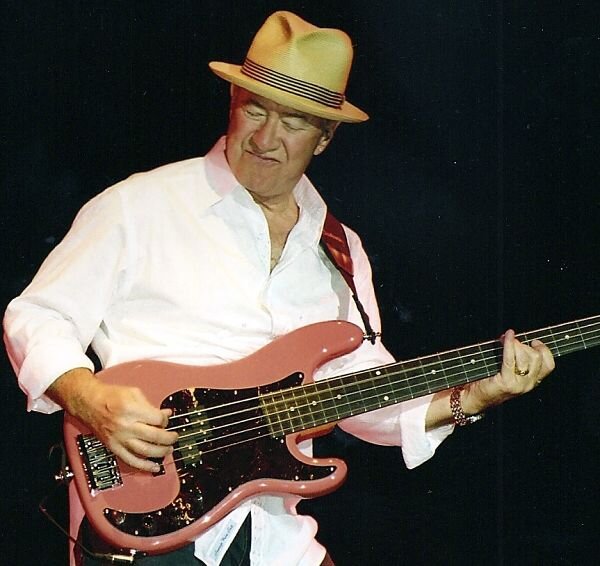 They were roots, Americana, and garage before there were names for it! Stuart Alden Cook anchored the sound of a generation as the founding bass player of one of the classic rock era’s most timeless and culturally relevant ensembles: Creedence Clearwater Revival.

A headliner at Woodstock (they did not appear in the film due to a contract dispute) and inducted into the Rock and Roll Hall in 1993 by Bruce Springsteen in a class that included Sly & The Family Stone, The Doors, and Cream – Stu’s musical life started with his parents.

Stu’s father was a professional trumpet player, and his mother played the keyboards professionally; hence there was always music in the house, and instruments to play.  It is not surprising that Stu played trumpet, piano and guitar before picking up the bass guitar.  Akin to the youth of his generation, Stu as absorbing the sounds of Chuck Berry, Jerry Lee Lewis, Fats Domino and Ray Charles as heard on a device known as AM radio.

He also watched Ozzie and Harriet on TV, and James Burton, who was Ricky Nelson’s guitar player – grabbed his attention. Stu had a life-changing experience when his parents bought tickets for Stu and his brother to see Ray Charles in concert.  After seeing Ray, he knew he wanted to play music, and learned to play Ray Charles’s songs on the piano.

Stu and Doug Clifford met in Homeroom in the seventh grade when they were 13, and have been friends since 1957.  In 1958 Doug heard John Fogerty playing piano in the school’s music room, and asked John if he wanted to start a band.  John said yes, but that he was a guitar player.  Doug said I have a friend that plays piano, and we can probably practice at his house.  Stu joined, playing piano with Doug and John Fogerty, and The Blue Velvets were formed in El Cerrito, California, across the bay from San Francisco.

The Blue Velvets played the instrumentals of the day by groups such as The Ventures and Johnny and the Hurricanes, along with standards, including “Blue Moon.”  The band gigged at school assemblies, Boys Club events, County Fairs, parties, and wherever they could find a stage to perform on.  By the time they were in high school they were playing assemblies in front of 300-400 kids, and their high school arranged for them to perform in events at other high schools. 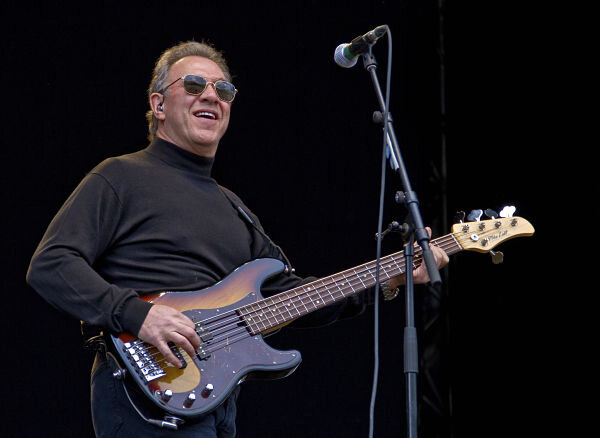 The Blue Velvets got their first taste of studio recording when Tom Fogerty, John’s older brother, asked the band to back him on some recordings he was going to use to get a record deal.  From that point on the band performed as Tom Fogerty and The Blue Velvets, with Tom as lead vocalist and also as the original instrumental trio, under the name The Blue Velvets.

In the mid-‘60s a television documentary aired on the local NPR station in San Francisco titled Anatomy of a Hit. Ralph J. Gleason, the music critic and a founding editor of Rolling Stone, was a producer of that documentary.  After viewing the film, they decided to take a demo tape to Fantasy Records, a local record label.  While Fantasy had primarily recorded jazz artists, the label was trying to branch out into other genres of music.

The label liked the tape, signed the band, and pressed vinyl. However when the band first saw the records, they were surprised to find that their new name was The Golliwogs, a moniker the label thought had an English ring to it as the British Invasion groups were still being heavily played on radio.

There were two more changes, in addition to the name of the band—John Fogerty became the lead vocalist of The Golliwogs, and with Tom Fogerty on guitar, Stu switched from piano and guitar to the bass. 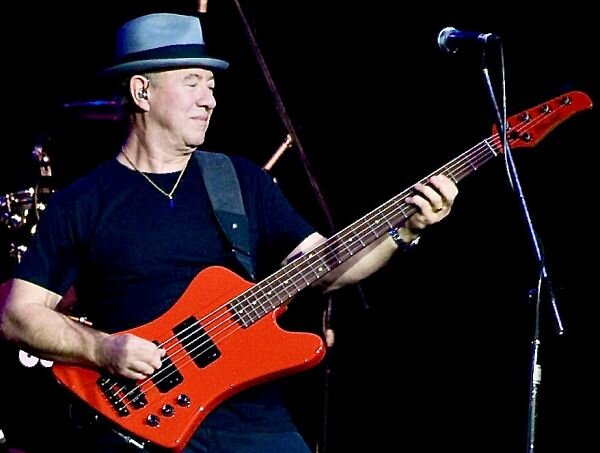 Around Christmas 1967 the band became Creedence Clearwater Revival, blending rock, blues, and country into a unique “swamp rock” sound.  By June of 1968, the band had released its first LP, Creedence Clearwater Revival and the single “Suzie Q” was on the charts.  The band had an incredible three and a half year run wherein they released multiple double-sided hits, and released three LPs in 1969: Bayou Country, Green River and Willie and the Poor Boys; two LPs in 1970:  Cosmo’s Factory and Pendulum; and Mardi Gras, the band’s final release in 1972.

During this period the band also recorded two live collections, earned multiple multi-platinum records, dominated the AM and FM airwaves, and played virtually every major festival in 1969, and became America’s number one band.

While there were several memorable gigs, Stu’s favorite was playing the historic Royal Albert Hall in London where many of his musical heroes had played, and a number of them, including Paul McCartney and Eric Clapton, were in the audience.

A large part of the band’s magic was certainly the singing and songwriting of John Fogerty, but also the ensemble playing of the Fogerty brothers on guitars, and the locked and loaded rhythm section of Stu and Doug Clifford. Stu and Doug created a bottom much like a chugging locomotive train.  According to Stu, less is more – the space between notes are as important as the notes. He views himself as an ensemble player with a good ear, developed by understanding theory from his days of playing piano, but also by learning music by repeatedly dropping the needle on a record to learn a song. 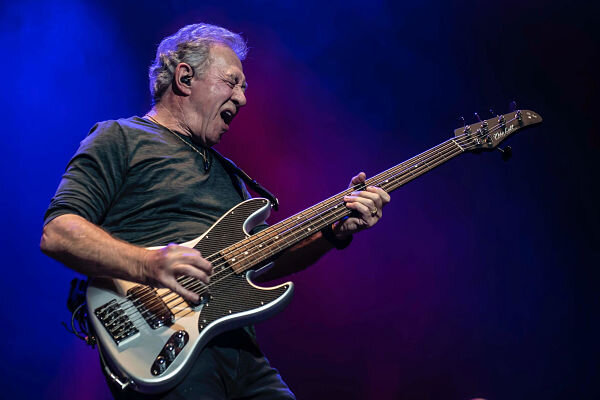 In between CCR and Creedence Revisited, Stu remained busy as a bassist and producer.  In the mid-70s, Stu and Doug Clifford formed the Don Harrison Band, and released two LPs, The Don Harrison Band and Red Hot. Stu and Doug also owned and operated a mobile recording studio, “Factory Productions.”  Stu was also the bass player in Southern Pacific, a country rock band that included John McFee and Keith Knudsen of the Doobie Brothers, and he appeared on three of four of that band’s LPs.  He also worked with Doug Sahm, and produced two albums for the legendary Roky Erickson of the 13th Floor Elevators, among others.

In 1993 Stu auditioned for the Rolling Stones to replace Bill Wyman.  While the Stones opportunity did not materialize what did transpire was that Stu, and Creedence drummer, Doug “Cosmo” Clifford, formed the hugely successful Creedence Clearwater Revisited music project (“Creedence Revisited”), and went on to play 1,755 shows  around the world over a 25-year period from 1995 to March 2020 when the band retired.  Creedence Revisited also released the platinum CD “Recollection” in 1997.

When Creedence Revisited was formed no one was playing CCR music as John Fogerty had refused to play CCR songs until 1997 due to a dispute with the band’s former record label.

Stu recorded the first CCR LP with a rented Fender Precision bass.  The first bass he owned was a used ’65 Fireglow 4001 Rickenbacker bass with black and white piano binding. That bass was used to record the Bayou Country LP.  All the other CCR albums were recorded with a modified Fender Precision Bass.

Duck Dunn was a major influence on Stu, and they became close friends by way of tours where CCR and Booker T & The MGs shared the bill.  Stu was also influenced by the percussive playing of Jack Casady “Jack’s notes had strong definition.”  The playing Carol Kaye and Joe Osborne as part of the Wrecking Crew as heard on scores of hit records also resonated with him.

Stu has been a finger-style player for most of his career, but a 2007 injury forced him to start playing with a pick.  Although he had played guitar, it was an adjustment playing his bass lines with a pick; it took some time to create the “feel” of the original parts.  He has tried multiple picks and feels that the gauge and material of the pick have a significant impact on the sound of his playing.  These days he prefers a Dunlop 1.14 Gator Grip picks.

While Stu preferred the four string Fender Precision Basses with CCR, he has been playing five-string basses since 1988.  Today his basses of choice are passive Mike Lull 5-strings. In 2019, Mike Lull created a Stu Cook SC5 Signature Model.  It’s a 35” scale on a smaller Jazz style body with T Bird pickups and a Tele style pickguard.  It has a big sound, is well-balanced, and weighs less than nine pounds. 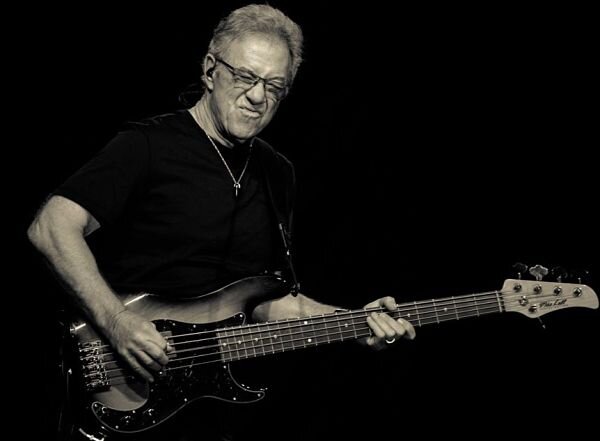 Stu prefers KLIQ Air-Cell guitar straps which give him a comfortable balance, and the straps are slip-resistant. He uses MJC Ironworks Nickle Plated Steel .45 – .125.  When he first started playing 35” scale basses he had a problem finding strings that didn’t have the silk from the string over the fretboard.  Stu feels these MJC strings give him a smooth, round and full-bodied sound.  “They have great tone, perfect tension, and last a long time.”

“Down on the Corner”  https://youtu.be/clJb4zx0o1o

“Born on the Bayou” https://youtu.be/l2zc4rSlBQ4

“Have You Ever Seen the Rain” https://youtu.be/bO28lB1uwp4

“Up Around the Bend” https://youtu.be/DX3o1O8ZsTw 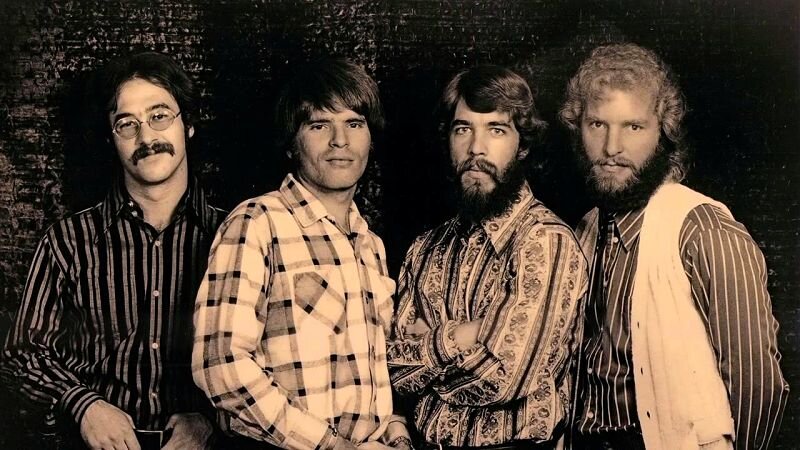