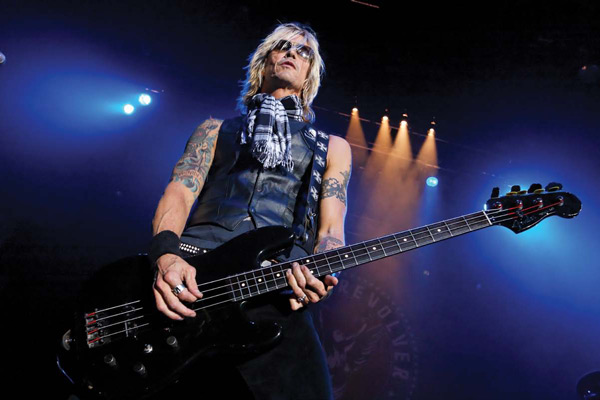 You either loved or despised Guns ‘n’ Roses – which is the ultimate gauge of a great rock ‘n’ roll band. Muti-instrumentalist, composer, author, economic advisor, masculine mentor,  media host, and bassist Michael Andrew “Duff” McKagan distinguished himself from the majority of his hard rock peers – most of whom played the instrument as a root-note-only buttress – with fluid counter-melodies which weaved their way through Axl’s banshee wails and Slash’s raucous riffage.

Born and raised in Seattle, Duff (an Irish nickname) started off as a drummer. He gravitated to the bass by way of his brother Bruce. Plying his craft in various local punk bands, Duff migrated to Los Angeles in the early 1980s.  He answered an ad in a music paper and met his future GNR bandmates Slash and Steven Adler, and the rest, as they say is history… Fans are advised to read his intriguing autobiography It’s So Easy and Other Lies (2011) for the GNR story.

Guns ‘n’ Roses emerged as one of the world’s biggest rock bands in the late 1980s – filling stadiums, whilst moving multi-platinum platters and merch. Akin to their ancestors the Rolling Stones, and Sex Pistols, GNR were the last of rock and roll’s bad boy bands.  Fans dressed like them, and musicians were inspired by them. They were among the few rock bands of any era that were recognized outside the parameters of the music business. GNR’s unsavory public behavior (mostly hype) garnered them headlines aplenty which further fueled interest in the band. Regardless of their persona, GNR delivered the goods: they were exemplary players, writers, performers, and recording artists.

Sadly the original band (mostly) collapsed after four studio albums. However if you were to cherry-pick choice cuts from the members’ ensuing solo slabs: Duff’s Believe In Me (1993), all the Izzy Stradlin albums, Gilby Clarke’s Pawn Shop Guitars (1994), and a Slash’s Snakepit disc or two; you’ve got a few killer GNR sides. Axl’s hired Guns cut a dud of an album sans memorable songs, and fans attended the live performances to hear the classic Duff/Slash/Izzy/Adler era material.

Duff’s debut solo slab Believe In Me and his most recent release Tenderness (2019) show him to be well versed in a variety of musical styles – spanning hard rock, blues, funk and Americana.  His band Loaded waxed three sides intermittently between 2001 -11 with Duff on guitar – a collective which echoed his Seattle punk daze with a modern metal modus operandi.

McKagan also anchored super-group Velvet Revolver with Scott Weiland, Slash, Matt Sorum, and David Kushner which kept the LA style hard-rock flame burning in pop era of the early 00’s with two fine releases. Among Duff’s other high-profile projects include Neurotic Outsiders with Sex Pistol Steve Jones and John Taylor of Duran Duran, a brief stint in Jane’s Addiction, and Alice Cooper’s star-studded Hollywood Vampires to cite a few. McKagan has also guested on slabs by Iggy Pop and Ozzy, among many others.  In 2015 Duff, Axl, and Slash began a series of GNR reunion tours which resurrect the old glory for those who missed it the first time around. No word as of 2020 if they’ll cut another disc.

Duff the bassist is a song-player who renders deep pocket grooves and countermelodies – usually with a slight flange / chorus effect.  Fender feted the Rock and Roll Hall of Fame bassist with a signature model (basically a P/J combo), attitude not included! Duff’s main weapon of choice during the Guns heyday was a Fender Aerodyne bass.

“So Fine” (written and sung by Duff) https://youtu.be/2bM4sdnrNf0 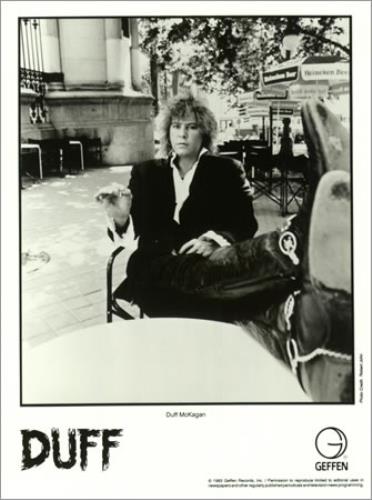