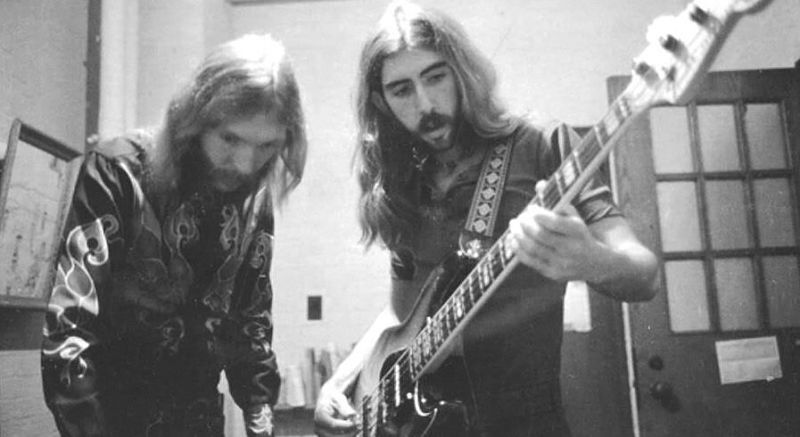 Artists/Bands: The Allman Brothers Band, The Shaynes, The Roemans, The Blues Messengers

Seminal Sides: Everything that Berry waxed with the Allman Brothers Band is essential listening for all bassists. Be sure to review the studio slabs, the live collections, and all the archival concert recordings!

Thank you to Ken Voss and the Illinois Rock & Roll Music Archives for providing much of the historical information about Berry.

Here’s a man that certainly fits the lyrics to the Allman Brothers’ “Ramblin’ Man” – “trying to make a living and doing the best I can.” His name – Raymond Berry Oakley. But the Allman Brothers were from Georgia, you say. Yes, but like the Paul Butterfield song, Berry Oakley was born in Chicago and raised in Park Forest, Illinois!

While attending Rich East High School, Oakley was in a local band called The Shaynes, other members including Tom Morris and Tim Grossi. “Berry was one of the original hot licks lead guitar players in the Chicago area back in the ’60s. His band, The Shaynes, and my group used to play many of the same venues,” remembers Brian Paul. Since my band was comprised of guys a year or so younger than Berry and his guys, we often were the warm-up act,” he said. Playing guitar at that time, “Berry used to play a forest green Strat through a 2 X 12 Sears Silvertone amp back then, and it sounded great!”

As the band gained popularity in our area, they got to play with some pretty big-name acts of the time, including The Byrds. One group they played with a lot was Tommy Roe’s backup band, The Roemans. This is where Berry got his first big break. The Roemans’ bass player was drafted, leaving a void. Berry’s band was playing the warm-up show for them at Westwood Junior High in Park Forest, Illinois when he found out about the impending departure of their bass player, and volunteered to take his place.

The only problem was that Berry did not play bass! So he pressed into service the talent of his good friend and former bass player, Jim May. Jim was the guy who got Berry playing bass. He coached him for about two weeks to get him going. Berry then dropped out of Rich East High School and went on the road with The Roemans.

After his stint with Tommy Roe’s group, Berry ended up in Florida, playing with various bands in the lucrative beach scene there. In Sarasota, he met guitarist Dickie Betts who was putting together a new band. Oakley joined along with drummer John Meeks, guitarist Larry Reinhardt and keyboardist Reese Wynans (who later went on with Steve Ray Vaughan’s Double Trouble); and they became the Blues Messengers.

In 1968, the band migrated through some personnel changes and relocated to Jacksonville, changing their name to the Second Coming, and released one single on the Steady Records label that included “I Feel Free” (which the Allman Brothers remade on their album Dreams) and a version of the Jefferson Airplane’s “She Has Funny Cars.”

It was then they met Duane and Gregg Allman. Unwilling to break up his band situation and friendship with Dickey, Berry declined Duane’s first offers to join his group. What ended up happening is that both Oakley and Betts ended up joining, and the Allman Brothers Band was formed.

Oakley played an important part of the sound in the early days of the Allman Brothers Band. Duane didn’t want somebody who just played bass, he wanted someone who was capable of taking the instrument and the music to a different level. In Berry, he found the perfect person. Oakley became a crucial element in the evolution of the iconic Allman Brothers Band, known for his deep and melodic bass lines that provided a platform for Duane Allman and Dickey Betts’ aggressive and dueling solos and jams.

Berry’s weapon of choice was a bass nicknamed “The Tractor.”  It was a Fender Jazz bass modified with a Darkstar Hagstrom pickup that was made for the Guild Starfire bass.  He moved the Jazz neck pickup down between the bridge and bridge pickup, and put the Darkstar pickup where the neck pickup was.

Sadly, on November 11, 1972, Berry died as a result of a motorcycle accident, that took place 3 blocks from where Duane died in a motorcycle accident the year before. His music and legacy live on with the catalog of Allman Brothers records we’re left with.  Berry was inducted into the Rock and Roll Hall of Fame in 1995 as an original member of the Allman Brothers Band.

Every track Berry Oakley waxed with the Brothers is essential – here is our list of favorites!

“One Way Out” with video https://youtu.be/yJ9twEldw_M

Dig Berry on “Ramblin’ Man” live at one of his last performances. https://youtu.be/jUTORC4eoGc

Though the Allman Brothers made their bones (and legend) as instrumentalists, interpreters, and improvisers, especially in their early years circa 1969-72 – Gregory LeNoir Allman and Forrest Richard Betts penned many a memorable tune.

To my ears “Melissa” b/w “Blue Sky” are their pinnacle compositions – as was the performance of their bassist Berry Oakley on these seminal tracks.

Akin to Sir Paul and Brian Wilson, Berry plies pedal tones, pocket grooves, and countermelodies which enhance the songs. When you’re on the bandstand playing either of these classics – and that included Lamar Williams, David Goldflies, Alan Woody, and Oteil Burbridge – if the bassist does not replicate Oakley’s motifs, the songs lack authenticity!