As a child Kerri Jane started writing songs on a plastic guitar.  That didn’t sit well with mom – who expected her daughter to attend med school. On the sly at age fifteen, Kerri purchased a Les Paul copy guitar from a used-car salesman, along with a small amp and instruction book, and began to practice quietly in the basement. Soon after, Kerri realized something was missing…something about that six-string guitar wasn’t stirring her soul! A guitarist friend suggested she switch to bass.  Once again, Kerri begged mom for a bass, but to no avail…

However her mother eventually relented, and surprised her daughter with a 1976 Gibson Ripper, but there was a string attached—Kerri had to agree she would never perform live with that bass guitar! Mom was convinced that if Kerri took to the stage with that instrument- there would be no turning back. Mom was right!

Shortly after, Kerri’s mom tragically passed. (Kerri still treasures her beloved Ripper, which remains in her possession.) She kept her promise to never gig with the Ripper. So she purchased a ’63 Fender Jazz from Randy Kertz (see his KYBP profile) which she uses to this day, with her dad’s approval. In 1993 Kerri anchored The Nomads, an an all-original ensemble from Ireland. That gig came to an abrupt halt when their visas expired! By that time, Kerri was playing in a two or three Chicago ensembles, and subbing in others. After working with The Nomads, she performed in numerous outfits which plied diverse, original music including: Eternalux, a shoegazing pop band; a punk/rock /funky jazz group which worked under the moniker of Hot Heels; Sister Soleil, purveyors of pop/industrial music; and hard-core industrial instrumental band aptly titled Lab Report. 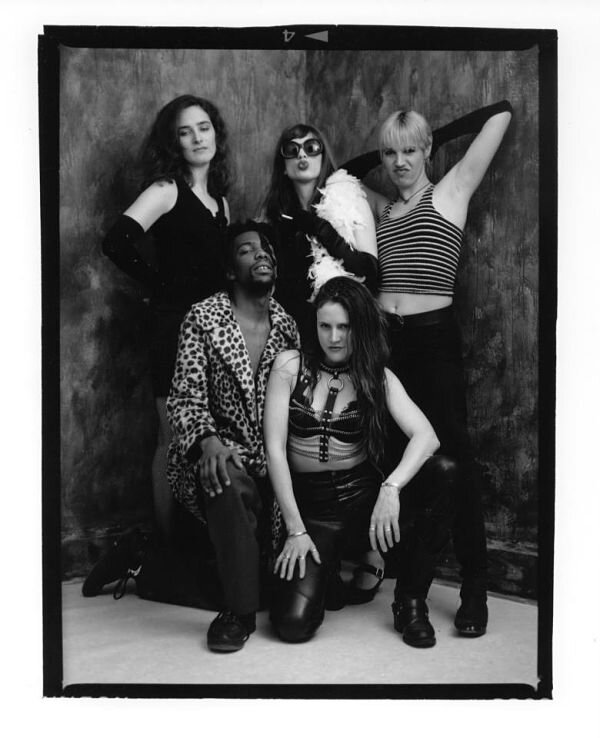 Her tenure with the band Lyla Stone led to Kerri a gig with the Fabulous Janes, followed by Catfight and Libido Funk Circus. All these bands were wildly popular on the club and festival circuit.  After four years with Libido Funk Circus, playing fifty-one weeks a year, Kerri decided to devote more of her time to Diversified Audio, a company that specializes in providing high performance sound reinforcement and lighting systems.

With Kerri’s history and ability to play in an array of musical styles, it’s no surprise that her influences are equally diverse. She cites James Jamerson, Carol Kaye, Paul McCartney, Eric Avery (Jane’s Addiction) and Mike Watt (Minutemen) among her bass heroes.

These days, you can catch Kerri laying down the bottom with The Gingers, a high-energy classic rock band which also includes Chrissie Olstad and Debbie Cielen on guitars, Emi Fukuda on keys, guitar and flute; and drummer John Sweeney.

With The Gingers, Kerri’s go-to bass is a ’99 Silver Sparkle Fender Jazz which she typically runs through an SWR 850 Watt Head, and 2 Eden Cabs—a 2×10 and a 1×15. Kerri also works the pocket with Gone Country, an ensemble which includes vocalist / guitarist Steve Calzaretta, lead guitarist Doug Schoenbeck, Rob Geiss on rhythm guitar, and drummer Chris Starke. Kerri’s go-to bass for Gone Country is a ’73 Jazz bass.