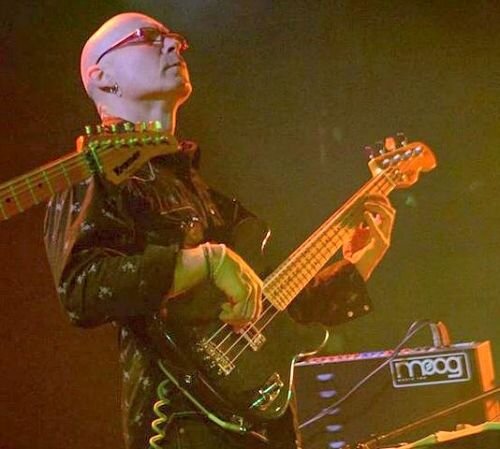 Gordon Patriarca was born into a family that loved music – dad was a jazz / blues buff and mom played piano and show tunes.

Then along came the transistor radio! Gordon and his brother were inseparable from these new portable devices as the Top 40 sounds of WLS and WCFL in Chicago became the soundtrack of their childhood.

When Gordon was in 8th grade, a friend from Ireland with older brothers introduced him to Rory Gallagher and Taste, Jethro Tull, John Mayall, Cream, Led Zeppelin, and much of the great British blues rock of the era. By the time he entered high school, Gordon was in love with the music, however had yet to pick up a bass.  That was about to change soon…

His younger brother was excelling with guitar lessons, and Gordon – fired up by Jack Bruce’s incendiary musicianship – decided that playing bass would be “cool.”  A neighbor kid owned a Montgomery Ward’s bass and amp that he loaned to Gordon, and he and his brother would spend hours playing 12-bar blues progressions.

Eventually Gordon got bass, a cherry red Epiphone Newport, and joined a band with his brother while taking lessons from a pro – Paul Zibits.  Gordon’s high school graduation gift was ’76 Fender Jazz bass.

Circa 1979-80, Gordon honed his craft with Trouts, which was in the Elvis Costello / Squeeze / Joe Jackson bag: melodic and hooky.

At this point, Bruce Thomas (Elvis Costello & The Attractions) became a huge influence. Regulars on the local circuit, Trouts lasted for three years.

Following Trouts, Gordon took on a rockabilly gig with Stevie Starlite’s band, followed by a blues-rock-fusion gig with Don Griffin and the Griff Band. Gordon then spent five years with The Remainders, a band that started out as a Cajun / Zydeco / New Orleans style band which morphed into an Americana / roots-rock/ pop band which released a cassette and CD.

After his tenure in The Remainders, Gordon was back on the local club circuit, and busy in the studio appearing on over forty releases.  His many studio credits include albums with Yardsale and Word Bongo, Joe Pug, Kelley McCrae and Sage Francis, also recording sessions at Abbey Road Studio with Icos. Gordon also anchored European tours and recorded with Jan James.

Over a forty-year span, Gordon has played thousands of gigs, including shows with Survivor, Spirit, Matt “Guitar” Murphy, Screamin’ Jay Hawkins, Sugar Blue, and Robbie Fulks, among others.

Gordon’s go-to bass for twenty years was an Ampeg AEB-1 Scroll bass that he purchased for $90.00 in 1984, and consequently modified.

These days he has a penchant for Squire Precision and Tele basses which he “hot rods” by, among other things, changing the pick ups and bridges.  He also uses a custom SG Bass, and a Fender Jazz bass with DiMarzio pickups and flat wound strings. His bass rig is a Yamaha PB-1 Pre amp, run through a Peavey IPR Power Amp, into either an Eden 2×12, Sunn 1×18, Mesa 1×15, or some combination thereof.

Gordon’s playing philosophy is to focus on the groove with melodic flourishes, as well as to be intimately familiar with the style of music he is playing, and how to play it, whether it is rock, pop, country, blues, or reggae.

In addition to being the Musical Director for The School of Rock, he is involved in multiple projects: Simply Elton, Simply Billy(Joel), Too Bad Company, Heroes (Bowie), Yacht Rock with the Yacht Rockettes, Rick Lindy and Dave Specter.

Music I have appeared on as a bassist from 1980 to the present. Some solo bass weirdness included here too. Tracks include recordings as a band member and as a studio musician. Some live stuff too.

The Remainders “Two For The Blues” https://youtu.be/b-_GxL2a_Lc

Yardsale “How Good It Feels” https://youtu.be/-R1Ysrormpg

Icos “Only You and I” https://youtu.be/QNGI7aa1vpA