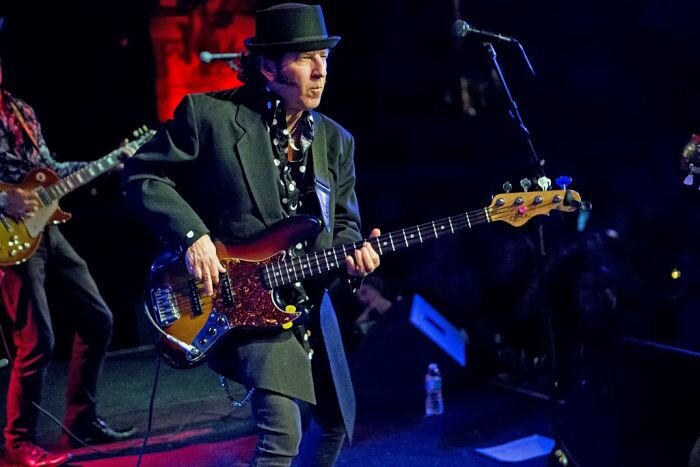 Tom Semioli: The first time I met Kenny Aaronson was at The Cutting Room in New York City a day or two following my journalistic diatribe in Huffington Post entitled Eleven Bass Players Who Belong in the Rock and Roll Hall of Fame (2015) which, of course, referenced Kenny. A few of the living players I cited, including Will Lee, thanked me for championing their cause.  However when Kenny came off stage and I introduced myself to him – ye gods, he went on a “Susquehanna Hat Company” rant regarding that “institution” and why it’s … an amazing array of expletives – some of which I’ve never heard outside of my Catholic school upbringing! And the irony was, I agreed with him! It’s a testimony to his passion. Of all the bass players who have stepped on stage in the name of rock and roll – Kenny Aaronson sets the bar. As my bassist pal Mark Polott noted during a recent Yardbirds gig  “Kenny really sells it!” I can’t ever recall meeting a “reputable” rock bass player who did not hold Mr. Aaronson in the highest regard. His work on record and on stage is legend. Few players can reference the entire history of the instrument in one performance as does Kenny. Every passage he has waxed on record – some great slabs, some average slabs, some not so good slabs – nails it with regard to tone, harmony, foundation, and rhythm. To paraphrase Dr. Winston O’Boogie – “if you had to give rock and roll bass playing another name …call it ‘Kenny Aaronson.”

Tony Senatore: As I told you last night, Kenny was someone I looked up to from my earliest days of playing the bass.  In interviews, he always instilled the idea of practicing, listening to Jamerson, working on reading music, playing with a pick, etc. From his stage persona, to his tone and playing, he’s the quintessential rock and roll bass player. 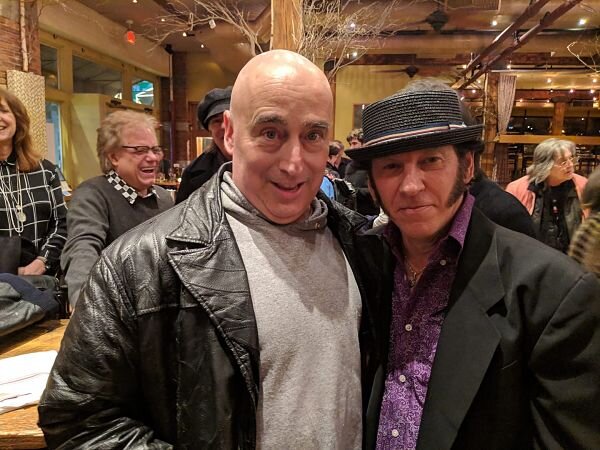 Paul Page: Growing up in Central New York I have the most vivid memories of seeing Kenny play with Derringer at The Jamesville Grove and Foghat at the Syracuse War Memorial. I was just starting to tinker with the bass and he quickly made me realize that you don’t tiptoe around with it, you man-handle that thing and drive the freaking ship. His confidence, bravado … was and is a daily inspiration to me. That’s how you play bass in a rock band! What a bonus when I moved to New York City and got to meet him and watch him do his thing up close. The coolest guy and most badass bass player! 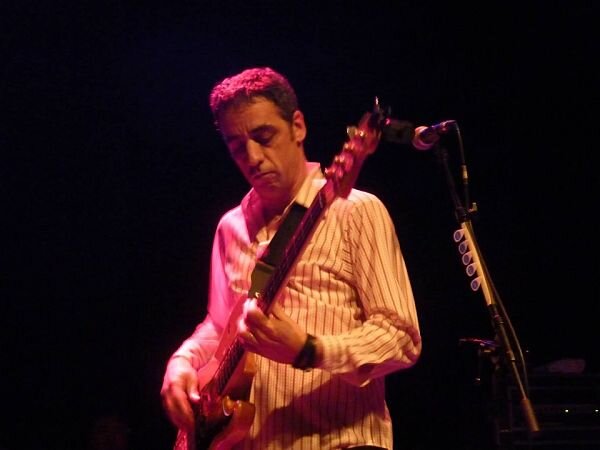 Dave Donen: I’ve known Kenny when I jammed w/ him in a basement on Pacific St. Brooklyn, 1972, we met up on a Tom Petty tour when I was w/ Carillo, and when Derringer comes on for the sound check, there’s Kenny w/ the best band I’ve ever seen Rick with. Kenny came into his own, he was, just great… for the last 40 years, just gets better. I’ve rubbed shoulders with a lot of ‘A players ‘ but Kenny has that ‘soulful’ human quality, not just a technical robotic ‘great’ player. He’s got the best of both worlds, Like James Jameson, playing, his soul runs deep. As a human being , and a friend, I feel it runs deeper.. he’s a truly caring, honest human being. p.s. You call Kenny, you get Kenny. p.s. Kenny- I’m on PayPal.. $$. 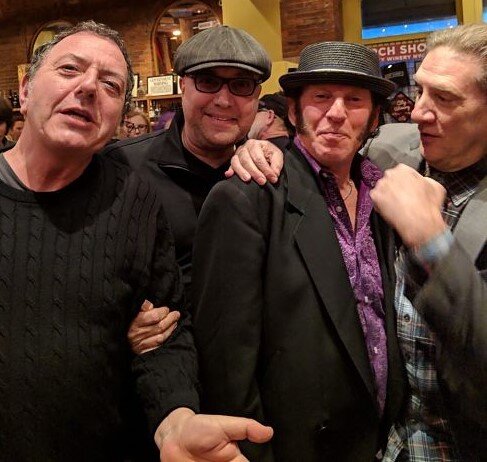 Tom Guerra: Since the early 1970’s, Kenny Aaronson has been recognized as a world-class rock and roll bassist whose resume reads like a history of modern music. Hailing from Brooklyn, New York, Kenny started playing bass at age 15, and soon became a regular on the New York scene with his power trio “Dust.” Most of us first heard Kenny’s playing on the 1973 Stories’ hit “Brother Louie,” which shot to the top of the American charts in September of that year. Most recently, Kenny has occupied the bass chair with The Yardbirds, breathing new life into their classic rave-ups. I have been fortunate to have worked with Kenny on several of my albums over the past few decades. To this very day, his youthful enthusiasm is contagious and his chops are still strong and fresh. 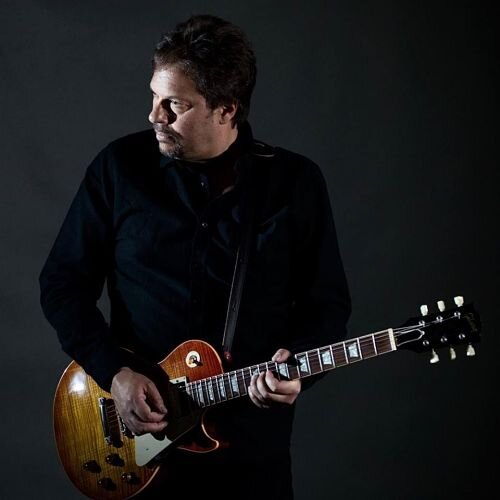 Benny Landa: I met Kenny in the abyss of the 1980’s rock scene then a few years later we were neighbors one day for 15 years. Ha! We’ve done a lot of miles playing together live & in the studio & we have a lot of music in common, not to mention our sense of humor. He means every note he plays & comes straight from the heart and feels great. He is very encompassed in authentic music and gear which is a huge plus. His instincts of the right instrument for the track in front of him is spot on. He will work on it till you’re happy and he’s happy. He cares. These days perfectionists like him, like us are rare. I will always play with my pal Double A. I can hear his tone a mile away. Love ya my brother! 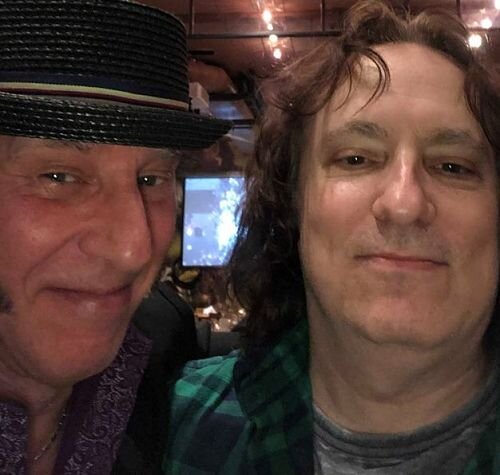 Joe Iaquinto: I was fortunate enough to start playing the electric bass in 1971, and I joined my first band in 1973. That’s the same year that the group Stories had a huge hit with their cover of “Brother Louie.” The bass playing on that song knocked my out, punched me right in the face! The older guys in my neighborhood told me it was Kenny Aaronson who played it, and that he was a fellow New Yorker. I was in awe of him then and I’m in awe of him still. I put him on the same list as Jamerson and Babbitt. His current work with the Yardbirds proves that he’s not only still got it, he’s got even MORE of it! 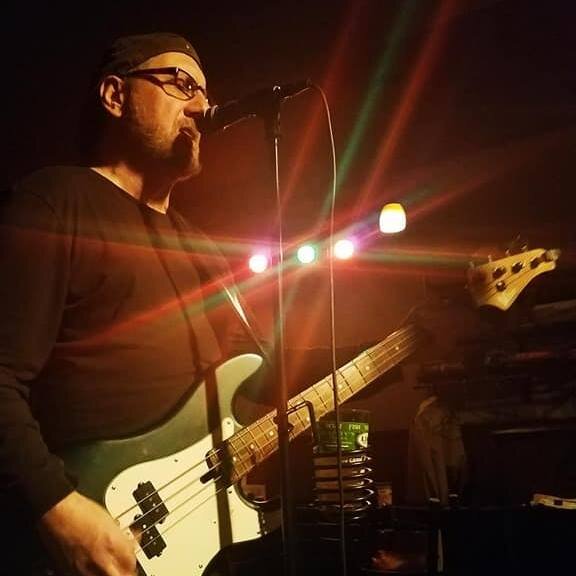 Joe Gagliardo: I first became familiar with Kenny’s playing on Stories’ Brother Louie. It is a lesson in restraint. He is in the pocket for most of the song, but as the song intensifies, Kenny’s bass flourishes propel the song to its conclusion. Since then, he has anchored many bands I love, including Derringer, HSAS, and currently The Yardbirds. His playing crosses many genres from Rock, to Jamerson/Motown and Brian Setzer, among others. He is one of my bass heroes, and the epitome of cool. 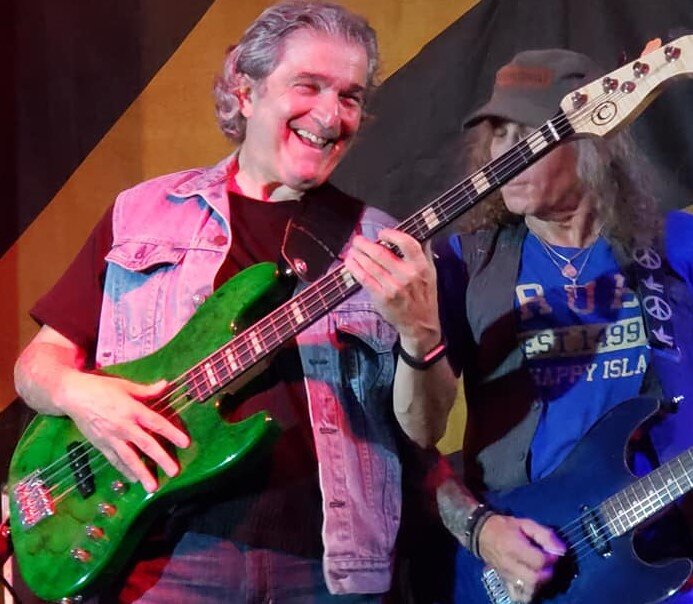 Mark Polott: I have been a fan of Kenny Aaronson almost as long as I have been a fan of The Yardbirds.  So to see and hear Kenny holding down the deep end on all those classic, groundbreaking tunes was magical on many levels. If you are of a certain age, and play guitar or bass seriously, this might be one of the greatest sets to ever get the privilege to play. I first became aware of Kenny probably around 1970. I was the bassist of Haystacks Balboa, a hard rock band out of Queens that were signed to Polydor Records and toured nationally. We were still in our teens and for local kids to get this kind of a break was unusual and amazing. The group Dust had a similar story, getting signed to Kama Sutra Records, and starting the musical journeys of three young men over in Brooklyn. It was natural to be curious and interested in this other young bass player, with a similar backround and beginning. Every few years we crossed paths, we might have dated the same girl, we even studied with the same guy on W. 55th Street. When I first heard Kenny on Stories’ “Brother Louie,” I knew we were listening to the same things. We even sat together at a Chuck Rainey event at the Bass Collective. Kenny’s resumé  grew geometrically and he became one of THE great rock bassists of my generation. This combination of musicality and showmanship was in full view at City Winery this week. Kenny was the focal point of the band for me. His monstrous tone and amazing presence kept me riveted. He paid tribute to the original bass parts of Paul Samwell-Smith, while injecting fire, fury and an attitude all his own. My face hurt from smiling. This was bass as it should be played…as it MUST be played. I was surrounded by excellent bassists in the audience. It was a brotherhood that seemed to feel the electricity as I did. This was one of our own and he OWNED it!  After the show a bunch of us lingered until we were “escorted” out. Kenny Aaronson was as generous with his time, his humor and his camaraderie as he was with his gift of an amazing musical performance. 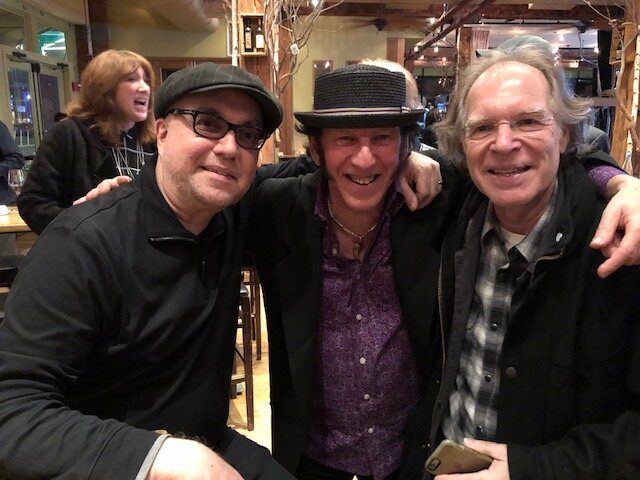 Lance Sulton: My connection to Kenny Aaronson is a simple one: kid in a rock cover band in the late 70s gets a homework assignment to learn “Still Alive And Well” from the Derringer Live album. What that kid in the late 70s rock cover band didn’t realize was he was about to be introduced to a kick ass, hard-driving, beast on bass with a gritty in-your-face tone that absolutely propelled his beautifully supportive and melodic bass lines and flourishes … and made that kid laugh out loud! Who is this Kenny Aaronson guy and how can I play *exactly* like him??

Why does it sound like he’s ripping his bass to pieces with fingers that must – obviously – be as big as Polish sausages??? So that kid learned *all* of the songs on the album (particularly “Beyond The Universe”) and that kid’s playing @40 years later is *still* a product of Kenny’s awesome musicianship and reckless abandon on the instrument. I have a heavy touch because of Kenny (and because I had lousy amplifiers), I embrace raw Fender Precision and Fender Jazz tones because of Kenny, and that kid still tries to infuse humor and joy in his playing just like Kenny.

*Side note* Kenny advertised bass lessons in the New York newspaper, The Village Voice, in the early 80s and I immediately jumped on the opportunity. I called him and he was awesome, but when I told him my brother was Kasim Sulton (bassist of Utopia and MeatLoaf fame at the time and an acquaintance of Kenny’s), he demurred and said, “If you’re Kas’ brother, you don’t need me!” I didn’t push it and let it go, much to my regret. Kenny: if you’re reading this, it’s never too late to show me how to beat the living shit out of my bass even more than I already do… 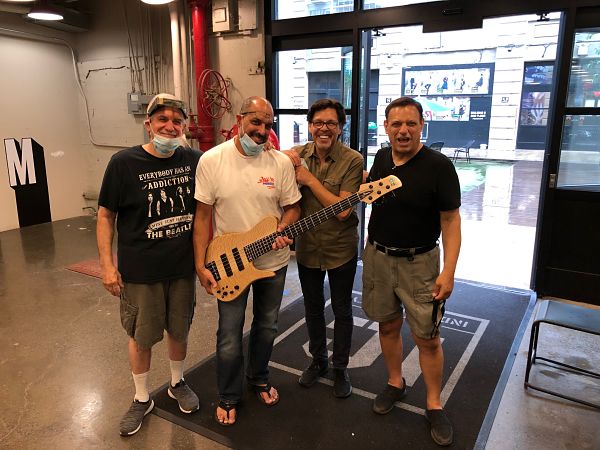 Gary Shea: The first time I saw Kenny was with Stories on Midnight Special. I loved the song “Brother Louie” and was keen on seeing who their bass player was.

A few years later I saw him with Derringer and they were excellent. Solid bass playing always with cool rests and fills. I mentioned recently that when I saw the original Jeff Beck Group with Ronnie Wood playing a Telecaster Bass through Plush amps I ran out and bought one down at Manny`s. Kenny messaged me and said that he too had done the exact same thing. We had a few words back and forth and it was nice to hear from him. All the best to a great player and good guy. 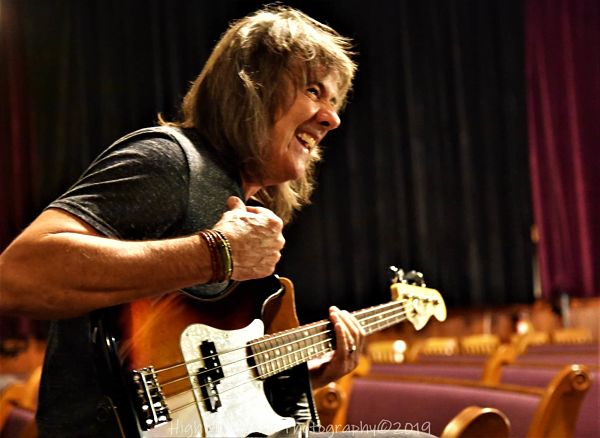 Robert Jenkins: I first heard him when I was a young teenager on the somewhat little known HSAS album entitled Through The Fire. This was before I really picked up the bass. Right away I felt how hard that band could groove for hard rock. And while I didn’t know it at the time, I know now that Kenny and Michael Shrive were the reason for that deep groove. 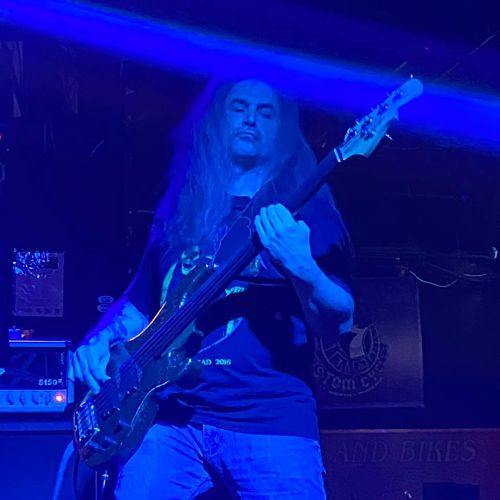 Rik Fox: Kenny’s playing has been an influence on my career, especially his rock steady and creative melodic approach to anchoring the rhythm section of any and every project he’s been associated with. I’ve been a fan of his going back to our NYC rock scene days and his band DUST (whose CDs I STILL have!)…it’s an honor and privilege to claim the Legendary Kenny Aaronson as a friend and fellow Low End Thunderer. 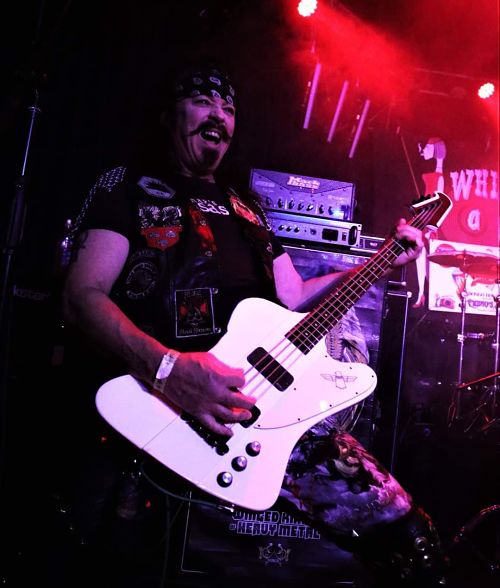