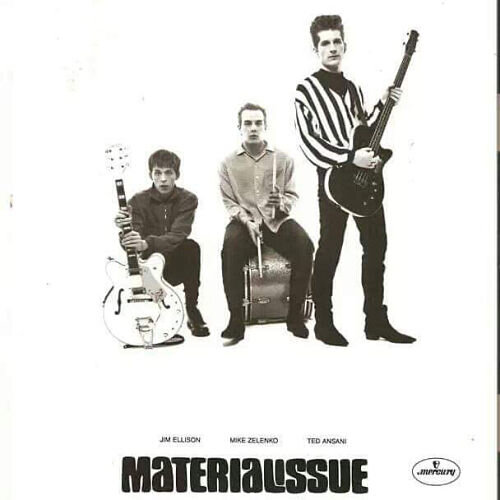 A power pop powerhouse that was so influential, it prompted David Bash to create the International Pop Overthrow Festival, taking the name of Material Issue’s first LP release on Mercury records.

Long before Material Issue, Ted rented, and eventually purchased a 1984 black MusicMan StingRay bass Guitar with a maple neck so that he could play in the High School Jazz Band.

That instrument remains his main bass today, along with a late 70’s MusicMan Sabre bass, and can be heard on many Material Issue tracks.  Check out the bass on the MTV show where the band played “Diane” live.

Ted has had a significant collection of cool basses, as can be seen in the video for the song, “What Girls Want.”

Ted’s bass inspirations are many, including;  Carol Kaye, The Beach Boys, Paul McCartney, James Jamerson, Duck Dunn (Booker T and the MGs), Pete Farndon (The Pretenders) and the avalanche of 60’s music he heard growing up.

Those influences served him well, whether he was playing with a pick, his fingers or his thumb—with his objective being to find the best way to serve the music and serve the song.

Being a trio, Ted’s style provided that “bass bottom,” whether it was playing rhythmic chords, the descending melody of “Renee Remains The Same,” “The Problem With Jill,” or the staccato playing in “Valerie Loves Me.”

“The Problem with Jill”     https://youtu.be/qF4mbRimaHk

Material Issue released three studio LPs for Mercury, and a live LP recorded at the Metro, where they are joined by Cheap Trick’s Rick Nielsen for a scorching cover of Sweet’s “Ballroom Blitz.”

Ted and Mike also collaborated on the issuing of Telecommando Americano, the final Material Issue release after the untimely passing of Jim Ellison.

Ted kept busy in the post-Material Issue days, releasing a solo album, Throttles and Pistons, in the early 2000’s, and you can catch Ted and Mike Zelenko these days with their Material Reissue Project.