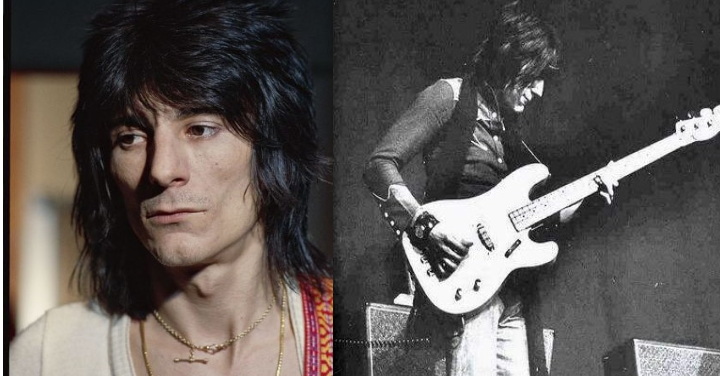 “I’m a Gemini, so I have a great time with the other guy!”

He is rightfully acknowledged as one of rock’s premiere slide guitarists with a gregarious personality to match his inimitable musical prowess.

However if Ronald David Wood had opted to set aside his signature Zemaitis guitars and other assorted six-strings full-time, he’d be known as a world-class rock bassist as evidenced by his work with the Jeff Beck Group (Truth, Beck Ola), and select tracks with his pal Rod Stewart (An Old Raincoat Won’t Ever Let You Down … aka The Rod Stewart Album, Gasoline Alley, Every Picture Tells a Story, Never A Dull Moment), and from various cuts throughout Faces and Stones slabs.

Woody never plays in the pocket, never quite outlines the changes in the traditional sense, and never renders a conventional bass line!

And when Woody has his own albums to do, he enlists the best players to support him including Flea, Darryl Jones, Willie Weeks, Shaun Solomon, Doug Wimbish, Jimmy Haslip, Jay Davis, Pops Popwell, and part-timer Keith Richards.

“An Old Raincoat Won’t Ever Let You Down”   https://youtu.be/qFt6RSJOtUU

The Faces: “Three Button Hand Me Down” https://youtu.be/RF8O8uL4unI