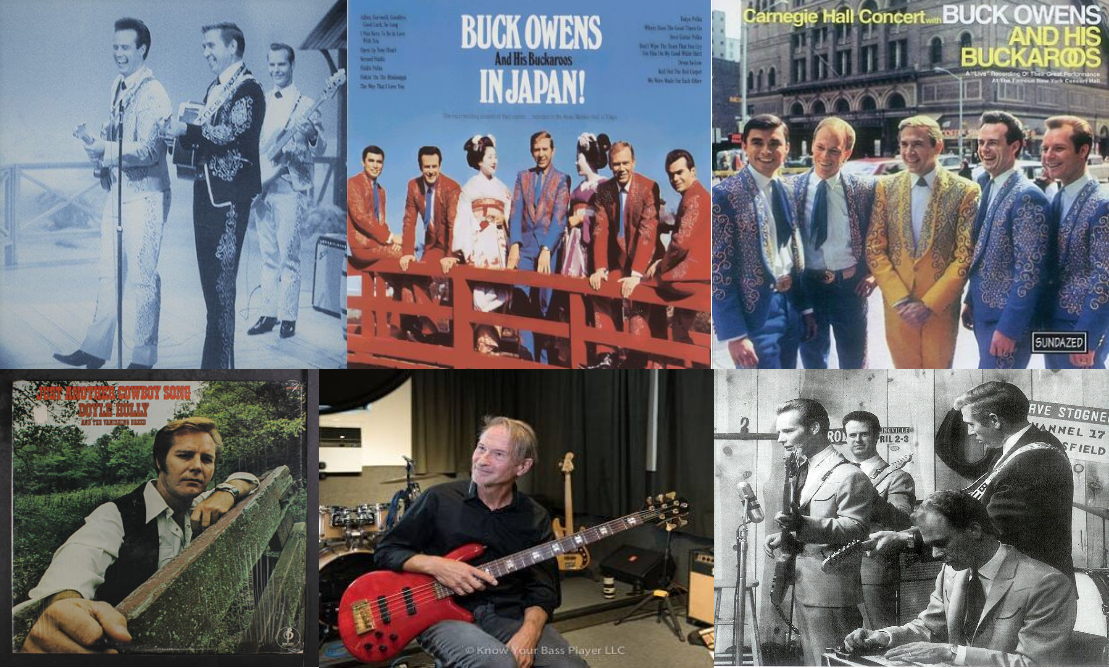 I knew Doyle Holly as the tour bus driver. He was a good driver who kept the bus fastidiously clean. He could be kinda grumpy, but I liked him.

It was around 2001 and we pulled up outside a college somewhere in the Midwest. There was a fan standing with a 12” album cover and a Sharpie, and as I got off the bus this guy asked me if Doyle Holly was on board. I was confused and curious. Doyle got off the bus and graciously signed the cover. It was an album by Buck Owens and the Buckaroos. That’s how I found out about Doyle’s illustrious career and impressive history. Over the ensuing weeks I hung with him a lot, we became chess buddies, and he shared a few stories. I wish I could remember them all.

Originally from Oklahoma, Doyle Holly held it down on bass during the heyday of Buck Owens’ Buckaroos, progenitors of the “Bakersfield Sound,” who had more than 30 Top Forty singles on the country music charts in the 1960s and early 70s and were a hugely influential band of fine musicians. During Holly’s tenure, the Buckaroos won the Academy of Country Music’s “Band Of The Year” award four years in a row from 1965-68, and won as “Instrumental Group of the Year” twice, in 1967 and 1968. Holly himself was nominated several times as “Bass Player of the Year” by the ACM, receiving the award in 1970.

The band recorded a live album at Carnegie Hall in 1966, which Holly said was his favorite recording as a Buckaroo. It is widely regarded as one of the best live albums in country music history. The Beatles famously recorded one of the Buckaroos’ hits, “Act Naturally,” on their 1965 album “Help!” Wikipedia states that “while on tour in London in 1969, Holly, Owens and (guitarist) Don Rich met up with John Lennon and Ringo Starr.”

However, Doyle himself told me a different story: Owens had told the band that the Beatles wanted to meet them during a day off on tour. Doyle and Don Rich had already planned to rent motorcycles and go riding that day, so that’s what they did. They weren’t so impressed by the Beatles that they were willing to miss out on a day’s riding!

After he finally left the Buckaroos in 1971, Holly formed the Vanishing Breed and recorded two albums and some of his own songs, such as “Woman Truck Drivin’ Fool,” “Queen of the Silver Dollar,” and “Lila,” which reached number 17 on the country music charts in 1973. Holly continued to record throughout the 1970s and scored a minor hit with “A Rainbow in My Hand” and a jukebox hit, “Richard and the Cadillac Kings.”

Holly is honored in the Rockabilly Hall of Fame and in 1980 received a block in the Walkway of Stars at the Country Music Hall of Fame. Tiring of the road, Doyle opened “Doyle Holly Music” in Hendersonville, Tennessee in 1982, finally selling the store a few years before his death in 2007. He also continued to play a handful of gigs across the United States and Canada, and as Wikipedia states, “for a time Holly even drove tour buses….”

That’s when I had the good luck to meet him and know him—thanks to that fan with the album cover. But dang, I wish I could have seen and heard him play.

“A Rainbow In My Hand” (Single) https://youtu.be/P5UflOnN0nc