Chris Semal “The Joy of Bass” 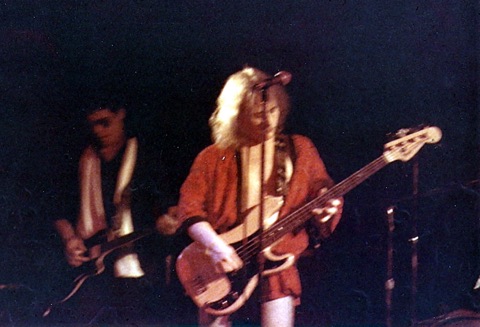 OK, after the last blog post dealt with a lot of sadness, I promised to lighten up and write about something happy this time around. Since some people have a fear of circus clowns, I’ll avoid that topic and stick to a subject that certainly brings great joy to each and every person, especially me: the bass guitar! Perhaps there are some six string guitarists out there reading this who will snort with derision, but let us pity those poor, misguided souls.

I first picked one up as a freshman in high school when the bassist for the Deep Purple cover band in which I was singing had to leave school for a couple of months due to some reason I can no longer remember. He lent me his instrument so that the band could continue to rehearse and Steve, the guitarist, demonstrated zen-like patience in teaching me some of the songs. I’m sure you’re all thinking, “Ah, the first thing he learned was ‘Smoke On the Water’”, but no, believe it or not, that wasn’t in our repertoire. It was way too obvious, and I commend my band mates for their foresight at that tender age. The first song that Steve showed me was ‘Child In Time’, the ten-minute opus from their amazing album In Rock.

I suppose he thought that the beginning chords would be easy enough, and he was right, but then about halfway through the song, it’s off to the races and I can’t speculate on how many hours we spent trying to play this, just that there were many, many blisters acquired. I should point out that Steve was a European transfer student whose father was head of the Goethe Institute in New York, the offices of this association promoting German international cultural cooperation located directly across the street from the Metropolitan Museum of Art on 5th Avenue. The band was kindly allowed to use the auditorium and it’s a safe bet that in 1974, there were no other bands out there slamming their way through ‘Highway Star’ on the stages of institutions named for key figures of Weimar Classicism.

I’d always admired the shape of the electric guitar or bass in all its permutations but had never strapped one on until then. I’ve now been playing for thirty-eight years (gulp!) and can still remember the initial sensation, feeling the smooth wood against the front of my body and flicking the switch to turn the amp on. If you’ve never experienced this, go into a music store somewhere and give it a try. The vibration from the strings through the wood, into the pick-ups and then finally out of the amp speakers is a majestic revelation. The instrument resonates and reverberates with the massive sound. A fourteen-year-old boy with a bass slung down at crotch level, plucking the low E string? Well, as I said before, I’m still jamming at fifty-two and have no immediate plans of stopping. Somewhere along the way, I actually learned how to play the instrument and it’s been one of the most rewarding experiences I’ve had.

P.S. I have to mention this: I always write with music playing and have some nine thousand songs in iTunes on my computer, invariably set to random play. Guess what started playing halfway through creating this post? You got it: ‘Smoke On the Water’.

Chris Semal was born in New York City in 1959 and has lived there all his life. He is aware that other places exist and likes to visit them from time to time, but the city is a hard mistress to resist, and he keeps going back to her. A musician, singer and songwriter, he has played pretty much every rock club in Manhattan at one time or another since the late 70s and went to school at the University of Miami to study Music Engineering, coming back north to do the only obvious thing possible, becoming a municipal bond broker and eventually working as a consultant building financial models. In the early part of the millennium, between both consulting and band gigs, he thought it might be interesting to see what would happen if he expanded on the 80 or so words he used in writing song lyrics and went for the 80,000 he would need for a novel. And so Trial Of Tears was born, along with a passion for developing plots and characters.