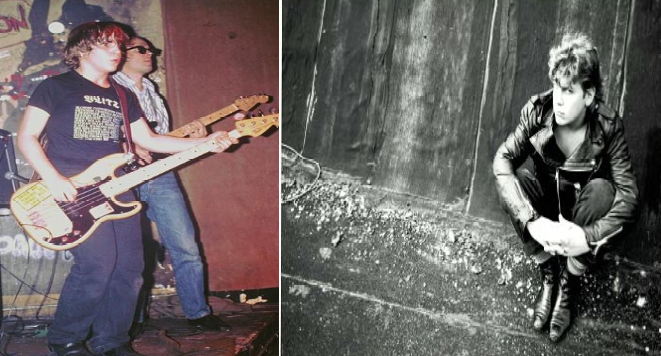 I’ve been hired to play guitar and bass on a friend’s tracks, so I’ve been pulling my bass chops back into shape. Different muscles, different head. I love to play bass. If I could sing lead while doing so I would have saved myself many a runaround and played it in my own bands over the years, as good bass players have always come dear. (I might be a bit picky in that regard, too.

When I first joined Richard Hell & The Voidoids in early 1979 I didn’t own a bass guitar, so I used one of Richard’s during the beginning of my tenure. I had been rehearsing with them for the first two months of that year, but nobody ever bothered to tell me that I was in the band during that time – I figured they were just trying me out, maybe waiting to see if they wanted someone else instead. I was sixteen and having fun just playing with Bob Quine and Ivan Julian and didn’t want to rock the boat; but I also didn’t want to invest in a bass if I wasn’t going to get the gig.

One day in early March I finally asked if I was an official member and they all laughed, assuming that the four-day-a-week rehearsal schedule might have been a tip-off that I already had the job. Before each session, I had been meeting Richard at his apartment on 12th & A so I could carry the bass to the studio near Union Square. The day after I was anointed a Voidoid, Richard said: “OK, Mister Bass Player, it’s time you got your own.”

I went to We Buy Guitars on 48th Street and got this 1976 Fender Precision Bass for $325. Many years later when I was at my lowest ebb of drunkenness and depression, I would run to pay off the pawn ticket at the shop that held it, always just a day ahead of it being sold off. I’ll always remember how happy I was when I pulled my life together enough to get it out of hock. It’s a wonderful slab of wood, and every time I play it I remember how truly fortunate I have been, and how fortunate I am today.

Love to you, wherever you are. Yes, you.