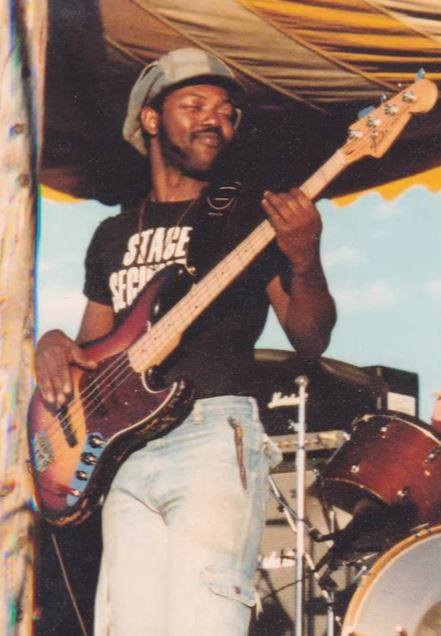 “Charles Calmese was one of the greatest blues / rock and roll bassists America has ever produced.  Coming out of tough 1970’s Chicago, where he cut his teeth with Matt “Guitar” Murphy and James Cotton, Calmese was soon recognized worldwide as a rock solid player, with his talents ultimately being utilized by Ike and Tina Turner, Chuck Berry, Muddy Waters, Johnny Winter, and Steve Miller.

Johnny Winter told me the highlight of his life was playing in Muddy Waters’ band, alongside Charles.  After having made his home in Willimantic, CT, Calmese became a fixture on the local scene with bands such as Avalanche and the Shaboo All-Stars.

I met Charles after securing a guitar spot in the short-lived “Easton Bros. Band,” after which he became a great mentor and friend to me.  He was a very giving person with a great, funny, friendly, larger than life personality.

To me, Charles was the ultimate bass player, whose groove always reminded me of a slow rolling Mack Truck… was steady, powerful, and unstoppable. Charles was so great, as a musician and as a guy….he was hand-picked to play on Steve Miller’s Fly Like an Eagle and Book of Dreams.

Sadly, Charles’ life was cut short in late October, 1988 after a head on collision while returning home from a late night show.

Holly Amx: Tom, I wish David could have seen this tribute. We were devastated to learn right after his accident that he passed. He was such a close friend and like a brother to David. Their jamin’ together once again in the heavens and cookin’ up some porgies and blackfish. Thanks for doing this, it’s greatly appreciated.

Charles Calmese: I love and will always miss my dad, RIP pops,jah bless,

Phil Badell: I first saw Charles with Muddy and Johnny at DAR Constitution Hall. He stood out as one of The most innovative electric bass players in blues, I believe of all time. And to this day I still refer many bass player to him as the way to Play traditional blues with a modern spin. I also learned that when he moved to Connecticut, and decided to stay, that it was because he was able to branch out, and work on different projects. If you look at his body of work, and the myriad of projects that Charles Calmese was involved with, I can just imagine where he would be today. He remains an influence to many new bass players, And I truly wish I had been able to meet him. Rest in peace Charles.

Extra Jimmies: What a talent…..saw him a number of times, but his shows at Shaboo with the James Cotton band were legendary. Still my favorite bass player…..may he forever R.I.P.

Marshall Wood: Charles was really great beyond great. He took blues playing to a new level and was the first fretless player I ever heard in a blues band. I heard him twice with James Cotton during the prime of the band with Little Bo, Matt Murphy etc. and both times he absolutely blew me away. I remember they opened the show with a Stevie Wonder tune that had just hit the radio airwaves, before Cotton came on stage. It was at that moment I realized Charles was capable of so so much!