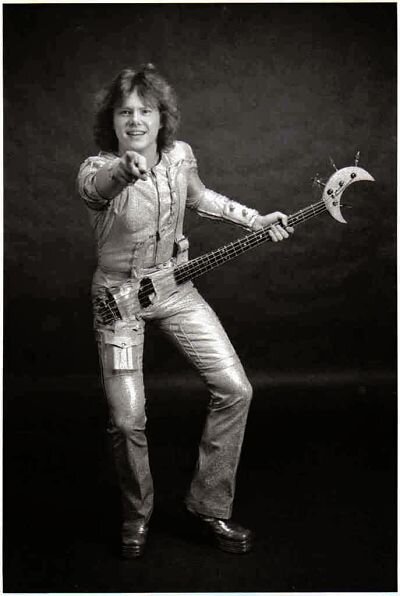 A prolific hit songwriter (“Free Ride,” “I Can Dream About You,” James Brown’s “Living In America,” “Instant Replay,” Black Box “Ride On Time” among others), producer, multi-instrumentalist, and recording artist, the late Daniel Earl Hartman anchored the most commercially successful incarnation of the Edgar Winter Group in the early 1970s, which also featured a couple of other legends: Rick Derringer and Ronnie Montrose.

A pocket player (“Frankenstein”) given to the groove, Hartman also plied his craft (s) with Tina Turner, Nona Hendryx, Joe Cocker, The Plasmatics (Metal Priestess) and Steve Winwood, to cite a select few.  Hartman was a prolific solo recording artist, waxing eight slabs from 1976 through 1989.

Dan was also renowned for his design and use of the infamous “bass suit” with the Edgar Winter Band, which set him back $5000 – a small fortune in 1974. Note: the instrument’s controls are on the sleeve attached to an aluminum plate. The guitar neck ends in a Crescent Moon and the suit itself has moons on it.

Said Hartman “The bass suit was actually one of the first cordless guitars in existence, and I invented it. It was built right into this silver bodysuit so it looked as though the bass was coming out of my body, and the volume and tone knobs were on the sleeve. When it worked it was great, but the tunings were a little strange, plus I can’t tell you how many times I got shocked. It wound up being just one more thing that we had to worry about on tour…’well, I wonder if this will work tonight.’ After a while I couldn’t stand wearing it anymore so I gave it up.”

Hartman and his double-neck on this live rendition of “Free Ride” with the Edgar Winter Group https://youtu.be/nIBOG8BRcdY