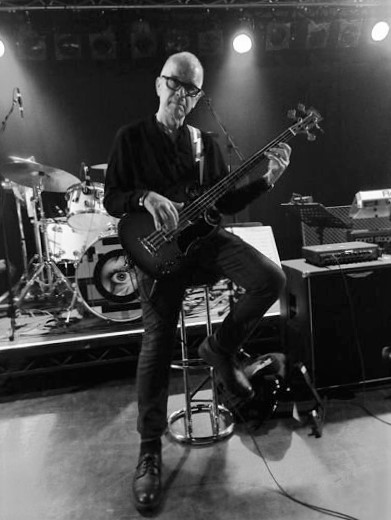 Aside from his production profundity, Tony is also an exemplary bassist as evidenced by his performance on one of the most under-appreciated, oft overlooked releases from a major artist: David Bowie’s The Man Who Sold The World (1970).

As such Tony emerged as a flexible harmonic anchor and clever melodic foil to the Bowie, who was still grasping for a musical identity. Visconti’s metal Motown mayhem on “The Width of a Circle” is worth the price of admission alone.

Circa 2014, Tony, along with original Spiders drummer Woody Woodmansy formed the Holy Holy (named after a b-side waxed in 1970) repertory ensemble to celebrate MWSTW, and rare (and not so rare) artifacts from the Bowie / Visconti canon. They toured both sides of the pond to rave reviews.  Among Holy Holy’s guest performers and members included Marc Almond, Glen Matlock, Maggie and Lisa Ronson, Tracie Hunter, Ed Kizilcay, and Clem Burke.

“Width of a Circle” https://youtu.be/pnRNAIQAc50

“Width of a Circle” https://youtu.be/ml4yJcqlG4o