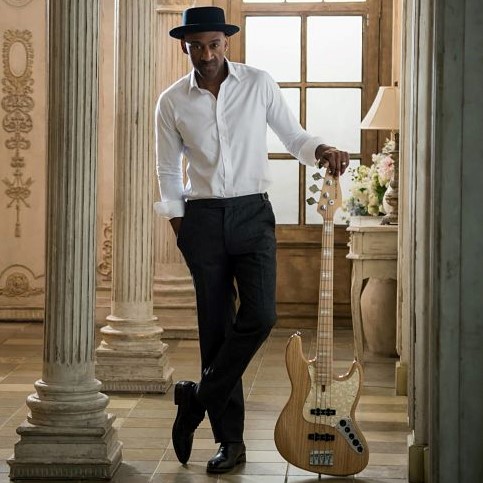 Akin to the icons who preceded and influenced him- namely Stanley Clarke, Jaco Pastorius, and Larry Graham – Marcus Miller has expanded the language of the instrument and the jazz fusion genre as a player, recording artist, producer, and composer. And like all the great ones, his tone – the Fender Jazz “scoop” – is instantly recognizable. In fact, Miller’s timbre is now universally acknowledged as a standard electric bass tone.

Born into a musical family in Queens County, New York 1959 – Miller was classically trained on the clarinet. Still in his teens, Marcus became a first call session cat – playing on scores of record dates, jingles, and soundtracks during the golden era of the New York City studio scene of the 70s -80s.

His first high-profile gigs were with Lenny White, David Sanborn, and Miles Davis. With Davis, during the jazz icon’s much heralded comeback in the 1980s, Miller served as the trumpeter’s musical anchor. Marcus composed and produced Davis’ final masterpiece, and one of the greatest cross-over jazz slabs of all time Tutu (1986).

As a bandleader he nailed a Grammy for Best Contemporary Jazz Album in 2001 for M2, in addition to several nominations throughout his career. The list of major artists Marcus Miller has collaborated with is inexhaustible. Marcus has scored nearly thirty films, and he’s always busy on the concert circuit on every continent.

To bring the instrument to a new generation, Marcus teamed with Sire guitars for his affordable, signature bass. And in his spare time, Marcus is a Sirius/XM radio host of Miller Time which covers “360 Degrees of jazz, from hip-hop to be-bop!”

Grover Washington “Just the Two of Us” https://youtu.be/Bw68MDfeN9I