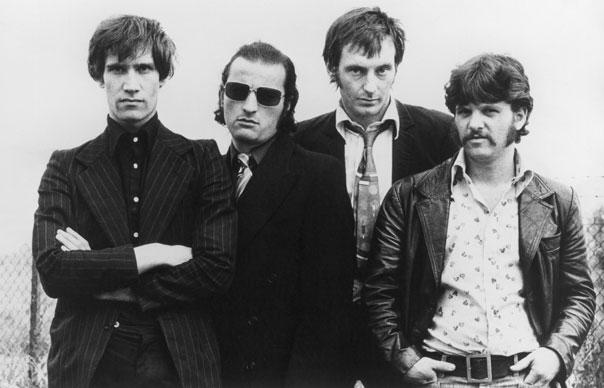 Opined The Independent’s Nick Hasted “Dr. Feelgood are remembered in rock history, if at all, as John the Baptists to punk’s messiahs!”

Noted Motorhead’s Lemmy Kilmister … “three alcoholics and a speed freak … what could possibly go wrong?” This incomparable quartet of Canvey Island Essex lads: singer Lee Brilleaux, guitarist Wilko Johnson, drummer John “The Big Figure” Martin, and bassist John B. Sparks looked (and behaved) as if they were coming off a bank heist!

Along with Brinsley Schwarz,  Graham Parker & The Rumour, Ducks Deluxe, and Dave Edmunds….to cite a few, Feelgood emerged among the founders and finest practitioners of Britain’s hallowed pub rock genre.  Their golden era is represented by the fiery, first two incarnations of the band featuring guitarists Wilko Johnson (1971 – 1977) and the late Gypie Mayo (1977-1981). A raucous meld of old-school rock and roll with stripped down rhythm and blues, their influence was profoundly felt by artists that came to prominence during the punk era such as Paul Weller, Bob Geldof and the Boomtown Rats, Blondie, and Richard Hell among others.

Dr. Feelgood’s bassist during their glory years was John B. Sparks – who rendered supportive pocket passages which fortified the frantic performances Wilko and Brilleaux. Sparks was a heavy handed plectrum player working a Gibson Ripper and/or Fender Precision. His passages quoted the Willie Dixon school of bass – keep it simple, keep it solid.

Nowadays a band working under the Dr. Feelgood moniker fervently / respectfully plays on and records with none of its original members. Brilleaux passed in ’94, but by then the band was a nostalgia act. However Wilko keeps the Feelgood flame burning hot. He waxed remakes of of the band’s signature tunes with Roger Daltrey in 2014 on their collaborative Going Home slab.  And his live shows, with bassist Norman Watt-Roy comprise a best-of Feelgood revue wherein the former Blockhead works the trail blazed by John B. Sparks.

“She Does It Right” https://youtu.be/iHm7uIC84YM

“Back in the Night” https://youtu.be/nW1dF8YJ0CM

“Down at the Doctors” https://youtu.be/uvRNRiA_h34