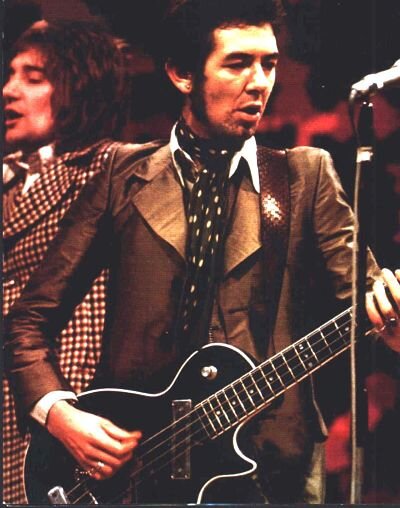 Affectionately referred to as “Plonk” by his bandmates for reasons not appropriate to discuss on this forum, the late great Ronnie Lane’s career, which spanned from 1965 until his passing in 1997, was an amazing journey which traversed pop, folk, rhythm and blues, soul and permutations thereof.

Though he is more renowned for his songwriting with Steve Marriott and the Small Faces, and later with The Faces (“Glad and Sorry,” “Debris,” “Stone”) Mr. Lane was a remarkably fluid bassist who served as a pocket player and melodic foil – often within the same composition.

Ronnie on fretless on “Debris” https://youtu.be/cbTDVTwPNZw

Ronnie’s solo career leading Slim Chance was a groundbreaking meld of traditional English folk and rock which inspired generations on both sides of the Atlantic.

Lane’s collaborative album with Pete Townshend Rough Mix (1977) was among the most overlooked gems of the 1970s.

Though diminutive in physical stature, Mr. Lane was a giant of classic rock – and kept gigging to the very end despite his debilitating disease.