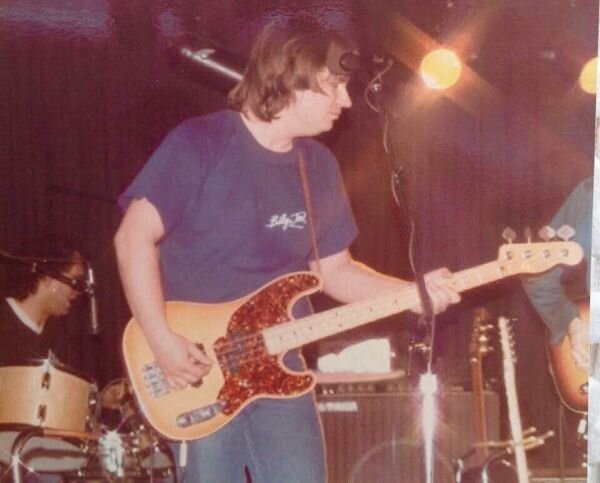 What a difference the bass player makes…

When William Martin Joel was allowed to bring his seasoned touring band into the recording studio – he waxed one of the best singer-songwriter sides of his generation The Stranger (1977)*, which was the first of a series of seminal slabs by the piano man.

The late Doug Stegmeyer embellished Billy’s hits and album tracks with tastefully executed grace notes, slaps, fretless glissandos, and nimble plectrum and finger picking – all rendered with a crisp bite in the service of the song. Doug came to the attention of Joel as a member of the band Topper, which also featured Liberty DeVitto and Russel Javors. His first tour with BJ was in support of the Streetlife Serenade album, waxed in 1974 which he did not appear on.

*Members of the “classic” Billy Joel band appeared on Turnstiles (1976) – which failed to reach a wide audience upon its initial release.

Rock journalist Stephen Thomas Erlewine noted in All Music Guide: “…no matter how much stylistic ground Joel covers, he’s kept on track by his backing group. He fought to have his touring band support him on Turnstiles, going to the lengths of firing his original producer, and it was clearly the right move, since they lend the album a cohesive feel. Turnstiles may not have been a hit, but it remains one of his most accomplished and satisfying records, clearly paving the way to his twin peaks of the late ’70s, The Stranger and 52nd Street…”

As pictured, Doug’s main weapon of choice was the Fender Telecaster bass.

Bruce Springsteen came to his senses and ensured that the E Street Band got their props – albeit fifteen or so years too late. Now Billy Joel needs to own up to the responsibility. As I and millions of others were witness, the classic Billy Joel band line-up of saxophonist / keyboardist Richie Cannata, drummer Liberty DeVitto, guitarists Russell Javors and David Brown, and the late bassist Doug Stegmeyer were among the best live bands of their era. And they were magic in the recording studio.

In the absence of Stegmeyer and company, Billy made good records. With Doug and the boys, Billy waxed classic records.  The Billy Joel band came of age in the 1970s – an incredibly fertile and diverse era. In those days, music artists competed and played on concert bills with everyone; spanning fusion powerhouses such as Return to Forever and Weather Report, to supergroups including Led Zeppelin; to groundbreaking roots artists such as Asleep at the Wheel and Townes Van Zandt; to prog rock masters Yes, Jethro Tull and King Crimson; to soul visionaries  Stevie Wonder, Marvin Gaye; to reggae innovators Bob Marley; to politico punk rockers such as The Clash and Patti Smith; to singer songwriter pioneers such as Joni Mitchell, Bob Dylan, Laura Nyro, Carole King and Van Morrison; and whatever we can pin on Frank Zappa and The Mothers – to name a very select few. Before computers hypnotized the masses, ad agencies segregated listeners, and bands became “brands,” young audiences of my generation were attuned to musical excellence.

The classic line-up of the Billy Joel band exuded musical excellence and stood equal among these above referenced 1970s era artists. Go back and listen to their records, and their sizzling live set on The Stranger Deluxe Edition which fuses jazz, bar band rock, and Broadway. Doug Stegmeyer and his bandmates elevated the artistry of Billy Joel on stage and on record to greatness, and are long, long, overdue for their recognition in The Rock and Roll Hall of Fame in the Musical Excellence category.

Doug groovin’ ‘n’ poppin’ with Billy on “The Stranger” at Carnegie Hall 1977 https://youtu.be/qdLPI6XhEN8

“All You Want To Do Is Dance” https://youtu.be/PiOff5cxSic

“Sleeping with the Television On” https://youtu.be/_d6MIS8L_y0

Doug also shined as a session cat with Graham Parker (Another Grey Area /1982), Phoebe Snow, Bob James, and Karen Carpenter, among others.